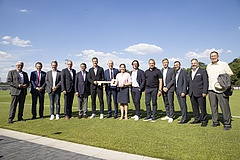 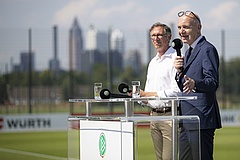 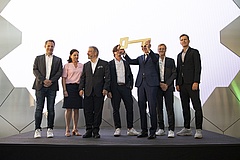 Today, Thursday, was the day: in the presence of about 300 invited guests from sports, business and politics, the new DFB campus was officially opened. DFB President Bernd Neuendorf, DFB Secretary General Heike Ullrich and Holger Blask, Managing Director Marketing & Sales as well as spokesman for DFB GmbH & Co. KG, accepted the keys for the new building in Frankfurt's Niederrad district on behalf of the DFB at the symbolic handover by Peter Matteo, managing director of the general contractor "Groß und Partner", and Dirk Lange, partner at kadawittfeldarchitektur.

Since the groundbreaking ceremony on May 03, 2019, 1155 days of construction have passed. This was preceded by years of testing and planning before new construction could begin on the site of the former racecourse in the Niederrad district. Now, the course for the future of the DFB is being set on the new campus on an area of around 15 hectares. Administration and the sports sector are united here in one place. In addition to the new building complex with a fitness area and around 40 conference and seminar rooms, there are also 3.5 soccer pitches, as well as a hall with an artificial turf pitch. The project has also created a nine-hectare citizens' park, which will be freely accessible to everyone. The 150-million-euro construction also still includes an athletes' house with 33 rooms that allow guests attending events to spend the night directly on the DFB grounds with a view of the lawn and the Frankfurt skyline.

Naturally, the opening of such a project had to be duly celebrated. At the opening, the DFB welcomed Hesse's Prime Minister Boris Rhein, Peter Beuth, Hesse's Minister of the Interior and for Sport, Martin Kallen, CEO UEFA Events SA, Mike Josef, head of the planning department of the city of Frankfurt am Main, presidents and CEOs of the state and regional associations as well as honorary DFB members. Guests also got a chance to experience the DFB Campus right away on guided tours and through a youth game on the grass pitch.

DFB President Bernd Neuendorf proudly said at the opening, "Today is an important day for the DFB and all of German soccer. The construction of the DFB Campus was a project of the century for the association. Today we are not only inaugurating a new building, but also establishing a culture of togetherness in German soccer. Ideas for a good future for our sport are being developed at the Campus, from which the grassroots and the top will benefit in equal measure. It is a milestone in the history of the DFB and, with a view to EURO 2024 at home, the hopefully successful bid for the Women's World Cup in 2027 and the development of amateur soccer, of enormous importance."

And Oliver Bierhoff, Managing Director National Teams and Academy, added: "For me, today is a special day. Finally, the vision has become reality. The German soccer family now has a common home. The DFB Campus is a huge opportunity for the association and German soccer as a central contact point for the grassroots and top-level sports - modern, open, sustainable. The DFB Academy, as a central component, is a service provider and impetus generator for German soccer with its areas of training and innovation. One of its central tasks is to continuously develop and improve the training of our players, coaches and experts. The Campus and Academy are important cornerstones on our way back to the top of the world. I am proud that we are now coming decisively closer to this goal with the DFB Campus."

You can find more info HERE