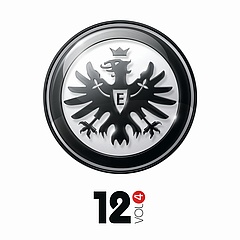 It is common knowledge that Eintracht has very special fans. But despite loud fan chants in the stadium or on the way there, probably few people knew that Eintracht supporters are also extremely musical. If you want to convince yourself of this, you can now do so with the new Eintracht Frankfurt CD 12 Vol. 4 "Aus der Liebe zu Dir. From fans for fans", which was released in time for the home game against Borussia Dortmund and is available in Eintracht fan shops, retail outlets and for download (including iTunes, Google Play, <link https: www.amazon.de eintracht-frankfurt-fans-vol-explicit dp b0767lsm4m ref="as_sl_pc_tf_til?tag=frankfurttipp-21&amp;linkCode=w00&amp;linkId=94f5c2e420a7f67ddc668fca25e0a8b2&amp;creativeASIN=B0767LSM4M" _blank>Amazon) for 14.99 &euro; is available.

Under the motto "Music by fans for fans", Eintracht fans were called upon in autumn 2016 to compose and submit songs for the club. From a total of 109 (!) entries, titles were selected by a jury in March 2016 as part of a song competition, which were then recorded and produced with professional support in "Studio 11", the recording studio in Frankfurt's Commerzbank Arena. This took place in the immediate vicinity of our team's dressing rooms and thus the "sacred" turf of the stadium. A unique action in the Bundesliga. In addition to the 16 tracks, there are two newly recorded songs as a bonus, both of which were already released on the "100 Years Eintracht Frankfurt" CD in 1999: Tankard's version "Schwarz-Weiß wie Schnee" and the classic "Eintracht, Deine Fans" by Roy Hammer.

Since the first CD 12 in 2005, the idea for Eintracht's 12th man has stood. By popular demand, the sequel followed in 2008 under the name "CD 12 Vol. 2" and in 2011 the "CD 12 Vol. 3". All titles that have been released so far under the name CD 12 were penned by Eintracht Frankfurt fans with professional help in the studio. No other Bundesliga club can point to as many songs written for the club as Eintracht Frankfurt.

In addition to Frankfurt music greats like Tankard and Roy Hammer, the Madhouse Flowers, Azzis mit Herz, Gastone, Martin Kessler as well as the Quietschboys can also be heard on the new sound carrier.

Dazu producer Ralf Holl: "On the current release we have ensured a diverse and varied production. I am sure that this will result in some new Eintracht hits that will soon be heard in the stadium."

Where is the new Eintracht CD available?

The CD has been available for purchase since 21. October 2017, either in all official Eintracht Frankfurt fan shops, in the online shop (<link http: shop.eintracht.de _blank>shop.eintracht.de) or for download (including iTunes, Google Play, <link https: www.amazon.de eintracht-frankfurt-fans-vol-explicit dp b0767lsm4m ref="as_sl_pc_tf_til?tag=frankfurttipp-21&amp;linkCode=w00&amp;linkId=94f5c2e420a7f67ddc668fca25e0a8b2&amp;creativeASIN=B0767LSM4M" _blank>Amazon) on the Internet.

Or try your luck with us, because we are giving away

All you have to do to get into the raffle is to send us an email to <link>gewinnspiel-ffmtipp@trifels.de with the subject EINTRACHT CD and tell us with which song you like to support your favorite club the most. And so that the CD reaches you in case of a win, you should not forget your address.

Terms of participation: The closing date is 05.11.2017. Employees of Trifels Verlag GmbH and their relatives are excluded from participation. Participation only from 18 years. No correspondence can be entered into about the competition. The legal process is excluded. A cash payment of the winnings as well as the resale are not possible.