New Entrée to the Europaviertel
from FFM Aktuell 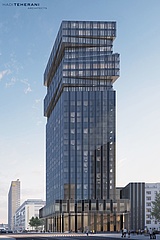 The Europaviertel is growing and growing. Now ABG Frankfurt Holding, together with Groß & Partner and gsp Städtebau, has broken ground for residential and commercial buildings, a daycare center and a supermarket at Güterplatz. With this, construction work has officially begun on the former Telenorma site at Güterplatz for the new Entr&eacute;e into the young urban district. The 13,700-square-metre site, which has lain derelict for around 25 years, will be home to 259 rental apartments, a hotel and office tower and a residential tower with 263 condominiums, as well as a large supermarket, a daycare centre and a two-storey underground car park.

A major urban development project, which of course has to be celebrated accordingly: "With these two architecturally particularly striking high-rise buildings and the urban residential development, the eastern entrance to the Europaviertel will be upgraded in terms of urban development and urgently needed living space will be created in Frankfurt," emphasized Frankfurt's head of planning, Mike Josef, at the ceremonial groundbreaking. "This is not an everyday project for us," said ABG Managing Director Frank Junker, who was in charge of the purchase negotiations for the property with the Robert Bosch company. "We are pleased to have found two high-performance partners in Groß & Partner and gsp Städtebau to develop this site together with us," Junker continued.

And this is how the new Entr&eacute;e will look when completed:

ABG Frankfurt Holding is building 259 rental apartments to passive house standards on the former industrial site. The apartments will be built as a seven-storey perimeter block development with a staggered storey on 29,500 square metres of gross floor area according to plans by Frankfurt-based architects AS&P. ABG is also building a daycare center and a large supermarket in the central part of the site. ABG is also building a two-storey underground car park with 419 parking spaces for all project partners. Two inner courtyards, one at ground level, the other on the roof of the supermarket, are available to future residents.

At the corner of Güterplatz and Mainzer Landstrasse, on the eastern edge of the site, Frankfurt-based project developer Groß & Partner is constructing a 128,000-square-foot building on 2.591 square meters of space, a 128-meter hotel and office tower. Designed by Hadi Teherani, "The Spin" skyscraper will house a four-star NH Collection hotel with 428 rooms and nearly 2,000 square meters of event space, as well as restaurant, bar and fitness areas. The top ten floors, which are built on top of each other in a staggered manner and characterize the architecture of the "Spin Tower", will be used as office space. Access to the new underground station on the U5 line will be directly adjacent to the tower.

"The Spin Tower will give the Güterplatz area a striking office and hotel tower that radiates power and dynamism and will do the location good. In the new quarter, the fusion of living, working, hotel and experience opportunities will be an important factor in highlighting the appeal and quality of stay," Peter Matteo, Managing Director of Groß & Partner, explains the significance of "The Spin".

On the northwestern part of the site, Berlin-based gsp Städtebau will build a 98-meter-high residential high-rise with 263 condominiums. What is special about this high-rise, which was planned by architects Helmut Jahn (Chicago) and Magnus Kaminiarz (Frankfurt) and will be called "Eden," is "the vertical greening and the floor-to-ceiling panoramic windows, which will create bright and light-flooded apartments," as Jürgen Blankenberg, managing director of gsp Städtebau and developer of the Eden residential high-rise, explained at the groundbreaking ceremony. "An ensemble for very different target groups is being created here. This intermixing contributes significantly to a sustainable urbanity and makes the location additionally attractive," Blankenberg continued. In addition to three penthouses, gsp is planning primarily 1- to 3-room apartments in the building with 27 floors on 15,150 square meters of space. The structural and civil engineering work on this project could be completed as early as 2021.

Parallel to this, the transport company is building the new Güterplatz underground station. The extension of the U5 line is expected to bring passengers to the Europaviertel via the main station from autumn 2022 onwards