New Frankfurt TATORT on Sunday on Ersten
from FFM Aktuell 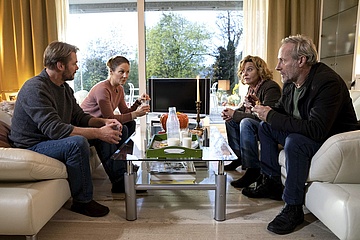 On Sunday, 13 September, it's finally that time again: for the twelfth time, the Frankfurt investigator team of TATORT, Janneke and Brix, will then be in action at 8:15 pm on Ersten. The hr production is called "Funkstille" and was directed by Stanislaw Mucha. In addition to Frankfurt, this time the film was also shot in Kelkheim. There, the former home of bestselling author Nele Neuhaus was found as a suitable location for the story. But also in the former aircraft hangar in Eschborn, in the Kleinmarkthalle or in the Caf&eacute; Rosso behind the Alte Oper the script from the pen of Stephan Brüggenthies and Andrea Heller was implemented.

Besides Margarita Broich and Wolfram Koch, other leading roles are played by Tessa Mittelstaedt, Emilia Bernsdorf, Kai Scheve, Leon Seidel, Henning Peker, Pierre Shrady, Isaak Dentler, Zazie de Paris and Werner Wölbern. And this is what the latest case of Janneke and Brix is about:

The seventeen-year-old Emily Fisher (Emilia Bernsdorf) is at night in the park with the two years older neighbor boy Sebastian Schneider (Tobias Schäfer) on a date. But he doesn't show up. At home, Emily learns that Sebastian has fallen to his death in a "lost place", an old factory building. For the chief investigators Anna Janneke (Margarita Broich) and Paul Brix (Wolfram Koch) it is quickly clear that it is murder. On the Internet they come across videos that Sebastian has made together with his buddy Adrian (Leon Seidel) in abandoned factory buildings. Through Ulrich Schneider (Henning Peker), Sebastian's father, Janneke and Brix get to know neighbors Raymond (Kai Scheve) and Gretchen Fisher (Tessa Mittelstaedt). The Fishers are an American family well integrated into the neighborhood who speak perfect German. Gretchen works at the US consulate in Frankfurt, Raymond is employed by a large insurance company. In one of the "lost places" filmed by Sebastian, Brix finds - well hidden - a clue that Gretchen had an affair with Sebastian. Was Sebastian blackmailing her? Could this be a motive for Gretchen's murder? Gradually, Janneke and Brix uncover the Fishers' dark secret .

You can find more about the Frankfurt investigator team HERE