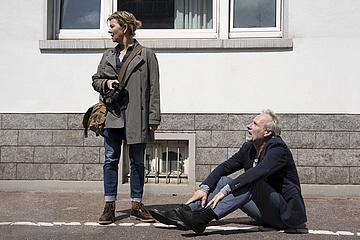 Actually, Sunday is always TATORT time. On this Easter weekend, fans of the Frankfurt investigator team Janneke and Brix should mark the Monday evening thick in the calendar. That's when "Finsternis", now the 15th Tatort with Margarita Broich and Wolfram Koch, airs at 8:15 p.m. on Ersten. This new case was directed by Petra Lüschow, who also wrote the screenplay. Other leading roles are played by Uwe Preuss, Victoria Trauttmansdorff, Julia Riedler, Odine Johne, Caspar Kaeser, Isaak Dentler and Zazie de Paris. The film was shot in April and May 2021 in Frankfurt and the surrounding area. One location was the Schauspielhaus Frankfurt, which Wolfram Koch knows very well. For here he is often on stage as a guest actor.

And that's what it's about in "Finsternis": In the middle of the night, a young couple alerts the police. In a wooded area on the outskirts of Frankfurt, the two have discovered a woman's body. But when the chief detectives Anna Janneke (Margarita Broich) and Paul Brix (Wolfram Koch) arrive there, the body has disappeared. A car registered to Maria Gombrecht (Victoria Trauttmansdorff) was observed near the suspected crime scene. Although the car has also disappeared, massive traces of blood indicate that Maria has fallen victim to a crime. Confronted with this fact, husband Ulrich Gombrecht (Uwe Preuss) and the two daughters Kristina (Odine Johne) and Judith (Julia Riedler) continue to cling to the fact that Maria is in France for a fasting hike and will reappear. Gombrecht is seriously ill, Kristina is heavily pregnant, and Judith is stuck in difficult rehearsals as a theater director. For the investigators, it initially looks like a robbery-murder, but then the clues lead right into the family. Soon Janneke and Brix discover that everyone here is keeping secrets from each other. And in the end, the truth is even more cruel than expected.

For this crime scene, a car was specially sunk into the Main River. In order to exclude dangers for the environment, the car was prepared however before accordingly: It was completely emptied and all lines were sealed. In addition to the team responsible for the realization of this scene, Jan Velten (camera), Manfred Döring (production design), Christian Mathias and Ralph Ganswindt (sound), Silke Franken (editing), Sandra Meurer (costume design) and Nathalie Mischel (casting) all worked to ensure that the 15th Janneke and Brix Tatort could flicker across the screens on Easter Monday. The score for the film was composed by Patrick Reising, Francesco Wilking and Moritz Krämer. It was recorded by the hr-Sinfonieorchester.

We wish you lots of fun and exciting entertainment!