New information board on the casemates unveiled
from FFM Aktuell 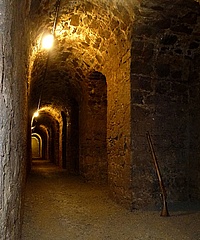 (kus) At a press event on Wednesday, January 17, City Councilor Daniela Birkenfeld and City Councilor Mike Josef presented the information board on the "Kasematten". The historic vault had been chosen by the Monument Advisory Board of the City of Frankfurt as Monument of the Year 2014. At the event, Peter Gerdon, Chairman of the Orphanage Foundation, Thomas Bauer, Chairman of the Monument Advisory Board, former City Councillor Peter Mensinger and the Head of the Monument Office, Andrea Hampel, provided information about the historical significance of the casemates for Frankfurt.

"We also wanted to use the occasion to remind a broad public of this extraordinary monument," said Head of Planning Mike Josef. "I would like to express my sincere thanks to the Orphanage Foundation, which has played a very significant role in preserving this valuable cultural monument and making it accessible. This is a stroke of luck for the casemates."

"The original planning for the new building by the Orphanage Foundation did have to be changed and the monument underneath had to be protected by an elaborate structural design," recalled Councillor Birkenfeld, who is also a senior in the Orphanage Foundation's care department. "But the effort was worth it: it adorns the foundation and the city alike to be able to come up with such a cultural monument."

The casemates were built in the 17th century as part of Frankfurt's former fortifications. The vaulted passage was discovered in 2008 as part of the legal preliminary investigation for the new building of the Orphanage Foundation. The well-preserved casemates were then uncovered, measured, mapped, photographed and assessed. All essential parts could be preserved at the request of the monuments office. Around 40 metres of the underground fortification corridor were opened to the public in 2011 after restoration work had been completed. The underground passage is still unique for the Frankfurt fortifications built in the Baroque period and thus an outstanding cultural monument. In 2014, the casemates were voted Monument of the Year. Visits to the historic vaulted passageway are only possible as part of a guided tour.

At the same time, the new publication "Denkmalpflege in Frankfurt am Main 2014-2016" Volume no. 4, in which an article also deals with the casemates