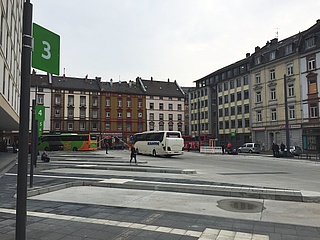 Increasing numbers of travellers are using long-distance buses, some of which are very cheap, to reach their destinations. In recent years, the increasing demand has naturally led to an increased supply in Frankfurt, which in turn resulted in a deterioration of the traffic situation around the main station. To counteract this, the city had approved the construction of a long-distance bus station in the immediate vicinity of the main station. Although this is not yet completely finished, it has now already started operations.

The new long-distance bus station is located on the south side of Frankfurt's main station directly behind the new IntercityHotel and was developed and built by the property owner and investor CA Immo in consultation with the city of Frankfurt. In a first step, the planned 14 stops and the necessary entry and exit barriers were completed so that the tense traffic situation at this junction can be relieved as quickly as possible. This will benefit not only motorists, but also travelers. The green mobility provider FlixBus was won over by CA Immo to operate the long-distance bus station for the time being. In a second step, the long-distance bus station is to be expanded for final operation by adding further services for travellers.

Michael J. Morgan, Managing Director of CA Immo Deutschland GmbH, is satisfied with the scheduled commissioning of the long-distance bus station: "As the property owner and developer of the entire area on the south side of the main station, it was a major concern for us to reorganise the traffic situation at this location," says Morgan. "In doing so, the safety of travellers was and still is a particular priority. Following the completion of the IntercityHotel in December 2018, another important milestone has now been reached to sustainably enhance the entire location. We are very pleased that we were able to win FlixBus as an internationally experienced mobility provider for the provisional operation and are sure that the company will do an excellent job here for all long-distance bus providers and their passengers."

Fabian Stenger, Managing Director of FlixBus and FlixTrain DACH, now sees it as his duty to also offer his customers a certain standard of quality: "As the operator of the new long-distance bus station in Frankfurt, we would like to set quality standards for the industry in the interests of our customers and contribute our valuable experience to this area. A dedicated team is available directly on site to the numerous bus companies that call at the long-distance bus terminal every day, ensuring smooth operations."

For residents and visitors of the Main metropolis Frankfurt, the long-distance bus is one of the most popular means of transport. FlixBus, for example, has been recording a steady increase in passenger numbers for years and currently up to just over 300 daily arrivals and departures, depending on the day of the week. As the operator, FlixBus will not only continue to be represented with a sales outlet on site, but will also take over the management of the provisional operations. Europe's largest long-distance bus provider already supports the operational processes at the respective long-distance bus stops at eleven locations in Germany by deploying its own station staff without, however, appearing as an independent operator to date.