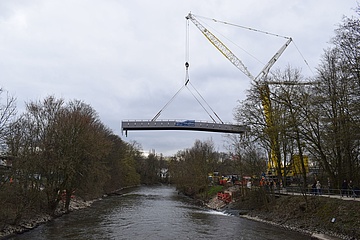 (ffm) A steel giant has taken its seat: The new bridge, which will in future lead from the west to the east bank of the Nidda at the Eschersheimer Freibad, was transported from the Ruhr area to the north of Frankfurt in an elaborate overnight operation from Monday to Tuesday. A team of around 15 piloted the steel structure, which is almost 32 metres long and weighs 52 tonnes, through the streets of Frankfurt. At the end of the operation, a large mobile crane was used: it lifted the colossus from the heavy transporter and carefully placed it in the designated location.

The new steel bridge was not assembled on site, but at the plant of a specialist company in the Westerwald. From there, the massive structure first began a journey north to Duisburg. In the Ruhr area, the bridge was given corrosion protection, among other things. Now it was brought as a special transport to the Main metropolis.

The Office for Road Construction and Development (ASE) replaces the old wooden bridge, which previously led over the Nidda to the Eschersheimer Freibad, with a more robust new construction made of steel. Renovation of the old bridge had not been worthwhile for financial reasons. The new bridge is not only more durable, but also wider, so that emergency vehicles can now cross the bridge without any problems. The new structure will remain closed to all other cars and trucks.

The ASE will now permanently shore the bridge and complete work on the east bank first. After that, it will be the west side's turn. It is expected that all work will be completed by the end of May and the bridge will be available for unrestricted use.