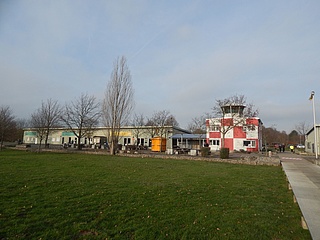 A popular excursion destination in Frankfurt is to be further developed in the coming years as a learning site for species conservation and biodiversity. For the Old Airfield in Bonames, an integrated overall concept is being drawn up by the environmental and building departments, which should be available by the end of 2022.

Lord Mayor Peter Feldmann says of the plans for this beautiful place: "The Old Airfield is a place to discover and breathe deeply - a big-city oasis with lots of wild, unspoiled nature. We want to make this place even more livable. Not only for the visitors - but for the countless plants and animals for which this magical place has become a home."

The Old Airfield has long been more than just a nice destination for a Sunday stroll. For example, it is already used for a variety of environmental education programs, such as those offered by the association Umweltlernen Frankfurt. As a result, the former American base is a recreational site, biotope and botanical study area, extracurricular learning site and much more. "In the environmental education of the future, climate change will be more of a topic. In the future, the former helipad will also be a place of contemporary history, where topics such as the Cold War or flight and migration can be addressed. However, the focus will also be on environmental education in the future. We will develop a concept that makes the 'old airfield' a place of learning for species protection and biodiversity in Frankfurt and the surrounding area," says Rosemarie Heilig, head of the climate department.

The once so popular "Tower Café" is also to be an important part of the new concept. There, events and festivities are also to be coupled with offers from nature and education. Ideally linking environmental education, local recreation and nature conservation - that is the central development option for the coming years. "The Tower Café should once again become the attractive attraction it once was. We will pay attention with the assignment to the fact that the operator concept fits both to the topic emphasis environmental education and invites visitors to the excursion destination Tower Café", announces head of the building department Sylvia Weber.

By the end of this year, the concept should be available to serve as a blueprint for the further development of the former airfield acquired by the city in 2001. The background to this is the increased demand for places for local recreation, which has once again increased significantly in the wake of the Corona pandemic, as well as the deconstruction of the refugee accommodation. The creation of the development concept is funded with 200,000 euros by the Regionalpark Ballungsraum RheinMain gGmbH and the Regionalpark RheinMain Taunushang GmbH.