New penguin enclosure at Frankfurt Zoo is ready
from Frankfurt-Tipp.de 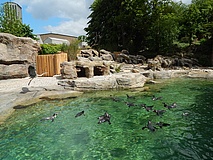 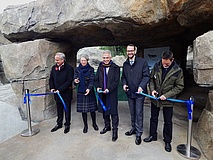 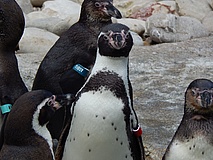 Around two and a half years after construction began, it is finally ready: the new penguin enclosure at Frankfurt Zoo. It is henceforth the new home for the Humboldt penguins, which already came to Frankfurt last December. The construction of the new enclosure was urgently needed, as the enclosure built in the 1950s in the entrance area of the Exotarium, which previously served as a home for gentoo penguins, no longer corresponds to the understanding of modern zoo animal husbandry in many respects. Apart from the fact that the facility is relatively small, the cooling system is also no longer up to date - something that, in times of increasingly important climate protection, was of course also one of the factors in deciding to build a completely new facility.

So, since the end of 2016, a new outdoor facility of around 2000 square metres has been built, consisting of a large pool, lots of vegetation and extensive visitor paths. Benches around the pool and also underwater viewing windows in an artificial grotto allow visitors to closely observe the penguins on land, on and under the water. "The new architecture immerses visitors in the world of the penguins," said Dr. Ina Hartwig, Head of the Department of Culture and Science, in her welcoming speech at the grand opening. For her, the new penguin enclosure is also an important part of the zoo's educational mission. After all, children in particular are to be made aware of animals, nature and ecology here, which will succeed far better in such a facility than is the case with the current penguin basin in the Exotarium. "Frankfurt's largest classroom is still our zoo," Hartwig said.

Zoo director Professor Dr Miguel Casares said he was happy that the facility could now be opened to the public after a number of problems that had caused delays in the construction process. He thanked everyone who had made this new building possible - a thanks that was echoed by Lord Mayor Peter Feldmann. He was convinced that the new penguin enclosure would make the zoo even more attractive. And he promised: " We will continue to push the development of the zoo."

In addition to Casares, Feldmann and Hartwig, the head of the building department Jan Schneider, the Peruvian consul general Luis Escalante Schuler and numerous invited guests were on site for the ceremonial opening to catch a first glimpse of the facility. And they were immediately able to see for themselves that the new inhabitants of the facility feel very much at home. For the Humboldt penguins, the new facility is an ideal place to live, as they feel very comfortable in our climate. The facility is designed to house a penguin colony of 30 to 40 breeding pairs, for which thirty nesting holes will be specially built. Thus, the zoo here also meets the species conservation program, as Humboldt penguins are on the list of endangered species.

This coming Saturday (May 11), the facility will be inaugurated with a big penguin festival. It's worth stopping by! You can find more info HERE