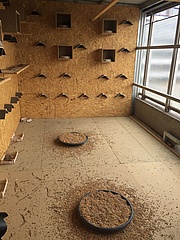 Pigeons are known not just to the most popular city dwellers. By many are so insulted as "rats of the air" and their droppings drive so some in the madness. But for Rosemarie Heilig, head of the environmental department, it is clear: "We first have to do something for the pigeons in order to be able to achieve something against the pigeon problem." And one who has been working for the animals for over 30 years is Gudrun Stürmer from the association Stadtteiltaubenprojekt Frankfurt, who has just been awarded the Citizen's Medal of the City of Frankfurt for her voluntary commitment. Together with the association, the Environmental Agency has opened the latest of three pigeon houses so far on the top parking deck of the multi-storey car park at the court.

The aim is to give the pigeons a place where they can nest in peace, find food and, if necessary, be cared for in case of illness or injury. "Water, food, nesting areas. If they find that here, then they also stay away from public places and streets," says Gudrun Stürmer. The animals are settled in the cared-for dwellings, fed in a species-appropriate manner and their eggs are replaced by plastic dummies. In this way, the pigeon houses can help regulate the pigeon population in the city.

The car park operating company is grateful for this new pigeon house after the positive experience with the pigeon house in the car park at the Hauptwache, which is the perfect solution to a massive pigeon problem in and around the car park at the court. With about 4,500 pigeons in the core area of Frankfurt, such a crate, which offers space for about 250 animals, is of course only a drop in the bucket. Especially as long as pigeons are fed - whether actively or passively through discarded food scraps - the birds will always be found in central places. But they are a good approach to an urban problem that just can't be solved by chasing them away, trapping nets or wiring.

Since 2013, the Environment Department has been supporting the Frankfurt City Pigeon Project association through the Sauberes Frankfurt staff unit. For the construction and operation of the new pigeon house, the staff office gave 10,000 euros. The Frankfurt housing association ABG contributed a further 2,000 euros. "Pigeons are part of our urban society. We do not have to love them, but respect them. This also includes that we offer them an animal-friendly habitat here in our city, where they do not die miserably and where they are fed sensibly," said Rosemarie Heilig. Now the city pigeons just have to move into their new home in the parking garage at the courthouse