New plans for the "Ginnheimer Spargel"
from FFM Aktuell 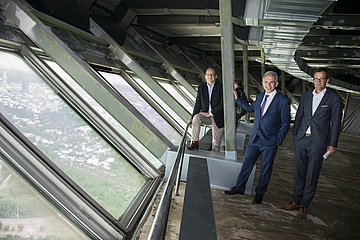 Photos: City of Frankfurt am Main 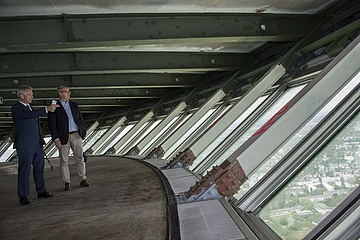 Many Frankfurt residents older than 30 certainly remember the days when the Europaturm, affectionately known as "Ginnheimer Spargel", was not only one of the tallest telecommunications towers in the world, but also a popular excursion and leisure destination. There you could eat delicious cake with a great view of the city or look for your next sweetheart at singles parties. But those days are long gone. The 311-metre-high tower, which was completed in 1979 and once attracted Frankfurt residents and tourists alike in droves, has been closed to the public for two decades. As a radio site, however, the Europe Tower is still in operation.

Together with the Hamburg member of the Bundestag and chairman of the Bundestag budget committee Johannes Kahrs, Lord Mayor Peter Feldmann visited the Frankfurt landmark on Monday. Together, they are to consider new uses and even a possible opening to the public. Because for Lord Mayor Feldmann it is clear: "Many Frankfurt residents grew up looking at our skyline, at the nearby Taunus, from the viewing platform with their families or with visitors from other cities. I too can still remember it well, also that the "Ginnheimer Spargel" is a distinctive mark that always gives us a feeling of arriving home when we travel home. It would be great if we could succeed in making this Frankfurt landmark accessible to all Frankfurt residents again."

I'm sure quite a few Frankfurters would agree with him. And Johannes Kahrs also pleads for an opening of the tower: "In the past, television towers stood for progress, technology and the future - today for home, leisure and history. Television towers only have an effect when they are open to everyone. Only doing moves", he added to the mayor's remarks. The Managing Director of Deutsche Funkturm, Bruno Jacobfeuerborn, added: "The Europe Tower is a defining structure for Frankfurt and the Rhine-Main region in two respects. It has provided the region with important radio services for 40 years and will continue to be an important part of the media infrastructure in the future. At the same time, it is impossible to imagine the Frankfurt skyline without it as a landmark."

The "Ginnheimer Spargel" has had an eventful history, of which admittedly little can be felt today in the empty pulpit. After the inner-city telecommunications tower was no longer sufficient as an antenna support for directional radio links, the then responsible Deutsche Bundespost decided to build the telecommunications tower. After a five-year construction period, the 337.33-metre-high and 75-million-DM Europe Tower with its antenna was completed. With a diameter of 59 metres, the six-storey high pulpit at a height of 227 metres is the widest in the world. It provides a magnificent view over the entire Rhine-Main area.

No wonder this unique place was used as a discotheque, restaurant and viewing platform for many years. Several powerful elevators took visitors up at a speed of 4 meters per second. The restaurant's six lounges could seat up to 220 guests and the discotheque featured performances by pop stars of the time such as Rex Gildo, Jürgen Drews and Bata Ilic.

However, despite the huge popularity and mostly fully booked seats, it was difficult to run the facilities economically. Thus, the Europaturm was closed to the public in 1999. This also had to do with the requirements of the fire protection regulations, which would have required an expenditure of millions. The technical conditions had also changed over the years. Technicians rarely had to visit the building anymore, because the modern transmitting equipment can long since be controlled remotely.

It is still unclear whether and how the "Ginnheimer Spargel" can be reopened to visitors. However, it can be assumed that there will probably not be a use as once, because for extensive and very expensive construction measures would have to be made. But that doesn't mean that the tower can't be opened for guided tours or special events. So let's hope that the talks between the mayor and Johannes Kahrs will bear fruit and that there might be the possibility to look at Frankfurt from one of its biggest landmarks again someday.