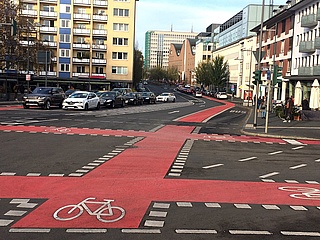 (ffm) The city of Frankfurt am Main continues to work at speed to improve conditions for cycling. In a prime downtown location, a section of the bike lane on Kurt-Schumacher-Strasse is now marked in red. Cyclists can now travel continuously along red-marked paths from Schönen Aussicht past Börneplatz to Battonnstraße. "With the resolution on the cycling decision, we promised to change the markings on main roads as a first step so that cycling would benefit. As promised, we are now following up," says head of transport Klaus Oesterling.

The implementing Office for Road Construction and Development (ASE) is first working its way north on Kurt-Schumacher- and Konrad-Adenauer-Straße to Friedberger Tor. The approximately 320-meter-long section from Schöne Aussicht to Battonnstraße has been completed. Red paint was applied to an area of around 600 square metres, at a cost of 13,000 euros. Red markings are relatively expensive because they have to be painted on the roadway by hand rather than by machine. The ASE has also marked one of the two lanes into a bus-only lane between Brückhofstraße and Börneplatz, so there is only one lane for motor vehicles going into town.

In order to apply the red paint, the weather has to cooperate - which is not so easy in winter. If it doesn't get too cold and stays dry, the ASE will next mark the Battonnstraße/Kurt-Schumacher-Straße intersection in January or February 2020 and gradually work its way north to Friedberger Tor. "We will provide additional structural protection for the cycle lane in that section, provided there are no compelling reasons not to do so," says Oesterling. Once at Friedberger Tor, the ASE will mark the cycle lane on Konrad-Adenauer-Strasse and, from the Konstablerwache level, on Kurt-Schumacher-Strasse in the opposite direction. This also eliminates one lane in favor of the bike lane.