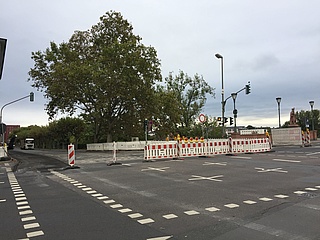 (ffm) A "SchÃ¶ne Aussicht" in the literal sense: The central road on the northern bank of the Main is getting a new asphalt surface layer. The Office of Street Construction and Development (ASE) will begin work on Monday, September 30. A construction period of two weeks is planned, which means that the new road surface should be available by the end of the Hessian autumn holidays.

The section of the road between Kurt-Schumacher-StraÃŸe and Lange StraÃŸe, which is around 330 metres long, will be renewed. To ensure a reasonable progress of the construction work, a full closure is necessary. "We have coordinated the construction project in such a way that the restrictions for road traffic are as short as possible," says ASE manager Michaela Kraft. The city of Frankfurt is investing 190,000 euros.

Because of the ceiling renewal by the ASE, the "SchÃ¶ne Aussicht" between Lange StraÃŸe and Kurt-Schumacher-StraÃŸe will be closed from Monday, 30. September, until Sunday, October 13, fully closed to through traffic.

A bypass in the direction of the west is possible via Ignatz-Bubis-BrÃ¼cke and Deutschherrnufer. Coming from the Old Bridge, it is not possible to turn right into SchÃ¶ne Aussicht. A detour via BattonnstraÃŸe is recommended.

The intersection between Kurt-Schumacher-StraÃŸe and SchÃ¶ne Aussicht will also be partially rehabilitated under partial closure; there will be lane reductions in the north-south and south-north directions.

Pedestrians and cyclists can pass the construction site.