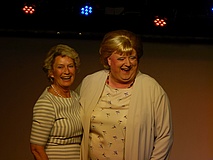 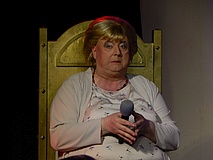 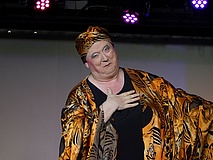 When Thomas Bäppler-Wolf was looking for a stage name for his own travesty show just over 25 years ago, he and an acquaintance drove past the Festhalle, where a concert by soul singer Patti La Belle was announced. The perfect inspiration for the young dance teacher, who was only called Bäppi by his friends: Bäppi La Belle was born. In 2018, the Grand Dame of Frankfurt now looks back on 25 years of Bäppi la Belle in her anniversary programme. The audience can expect a reunion with popular characters such as Lia, the apple wine hostess. And of course the "golden mouse" Angie may not be missing, who at the premiere immediately brought her "political colleague", the former mayor of Frankfurt Petra Roth, on stage.

In addition to some songs that have a very special meaning for Bäppi, a selection of the amusing one-shot films that are shown before every Bäppi show and music videos may not be missing. These include very special training for the Olympics, the fairy tale of the "Queen's meat sausage" or a glamorous appearance in a casting show - guest appearance by "Let's Dance" juror Joachim Llambi included. These videos are framed by an amusing journey through time, which shows that not only Bäppi's costumes have changed over the years. Just how much times have changed in terms of advertising or TV entertainment is made clear by Bäppi in her own very special way. And time has also left its mark on the humour. Some of the gags from the earlier programs can no longer be used today, says Bäppi - only to give them again, against all political correctness.

For one thing becomes clear in this anniversary show: Times may have changed - Bäppi has not! With typical Hessian cordiality, wicked tongue and disarming charm, Bäppi La Belle has been giving the inclined Theatrallalla audience something for a quarter of a century now, something that is becoming more and more valuable, especially in this day and age: Just having a good time in a rollicking mood. Colourful, shrill, wicked and yet always lovable - that's what Bäppi has been for the past 25 years and hopefully will remain so for the next!