New signs on the GrünGürtel circular cycle route: The yellow dot is coming
from FFM Aktuell 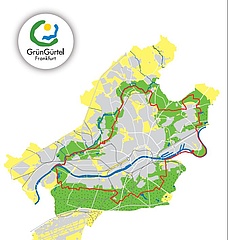 (kus) Since Thursday, March 9, signposts in a new design have been installed along the GrünGürtel circular cycle route. Until now, the 64-kilometer route around Frankfurt was signposted with green-blue signposts. But because the tour leads through greenery, the signs are not always easy to see. On the new signposts, the green-blue background has been supplemented by a large yellow dot with a bicycle. The dot is taken from the GrünGürtel logo. The new signs are thus easily recognizable even from a greater distance.

The GrünGürtel maintenance team will begin replacing the approximately 300 signs near Höchst and work its way through the Niddatal, over the Berger Rücken and finally through the Stadtwald. The work will take two to three weeks. During this period, there will be a "sign jump" at two points along the circular cycle route. The GrünGürtel project group asks all cyclists for their understanding.

The General German Cycling Club (ADFC) in Frankfurt was involved in the decision to redesign the signpost and agreed to the signs with the yellow dot. After all, the ADFC was the originator of the ideas for the circular cycle route. This is also acknowledged in the exhibition "Vision and Obligation - Frankfurt's Green Belt" at the Institute for Urban History. There you can also see a historical photo of the then head of the environment department Tom Koenigs accompanied by ADFC member Harald Braunewell at the installation of the first cycle path sign.