New species at the zoo
from FFM Aktuell 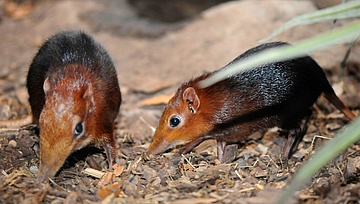 Two proboscis doggies have moved into the Grzimek House

Contrary to what the name suggests, proboscis doggies have nothing to do with dogs. Rather, the animals, which weigh up to 700 grams, are related to proboscideans. A pair of these animals, which are native to eastern Tanzania and Kenya, has now moved into the Grzimek House. And this is a real speciality, as it means that Frankfurt Zoo is currently the only zoo in Germany to keep this species.

Red-shouldered proboscis dogs (Rhynchocyon petersi) can reach a head-torso length of up to 31 centimetres, plus a hairless tail up to 25 centimetres long, a proboscis-like elongated nose and fur that is reddish brown in the head and shoulder area and glossy black from the middle of the body. So much for the sober description of these forest-dwelling mammals. The somewhat less factual impression: extremely cute!

Zoo director Manfred Niekisch is pleased about the new addition to the day area of the Grzimekhaus: "We received our pair, both animals born in June 2016, from the zoo in Rotterdam. This makes us currently the only zoo in Germany that keeps red-shouldered proboscis dogs. In Europe, apart from Rotterdam, they can only be seen at Antwerp Zoo. Between 1978 and 1988 and from 1992 to 1997 there were already trunk dogs here - but a different species, namely golden-backed trunk dogs. One of our curators was so deeply impressed by the animals as a child back then that he now took the opportunity to bring proboscis doggies to Frankfurt again."

Red-shouldered proboscis doggies are not currently considered endangered. However, habitat destruction is a threat in their relatively small range along the coasts of Tanzania and Kenya. They also frequently fall prey to stray dogs. These small mammals are forest dwellers that feed primarily on insects. They live in monogamous, lifelong partnerships - though the relationships are rather loose. Males and females share a territory, but spend days and nights solitary. With the help of scent glands on their feet, they set scent marks in their territory as they walk.

Proboscis are very cautious and constantly on guard, as they have numerous predators in their native habitat. "So we take the acclimation process at the facility very gently," Niekisch said. "The enclosure is equipped with a great many hiding places and, until further notice, the windows will remain whitewashed. While this obstructs our visitors' view of the animals, it is important so that they can settle in and get to know the hiding places. We hope that the pair will quickly feel at home with us and that they will have offspring in due course."