New switches for the Südbahnhof sidings and turnaround
from FFM Aktuell 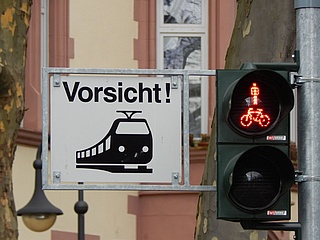 (kus) Work on the new switches at Südbahnhof has been underway since Monday, October 16. Until Sunday, 22 October 2017, no subways will run from Willy-Brandt-Platz to Sachsenhausen. Many may wonder what exactly is happening there. Because passengers will not be able to see anything, as the work is taking place in the tunnel, in the Südbahnhof turning and stabling area.

Workers are installing a total of four new switches. Individual components were repeatedly replaced on the predecessors, but the last complete replacement was around 15 years ago. Their service life depends on load and wear, which are extremely high on the A line. More than 400 trains per day and direction run there, around 100,000 passengers use the lines every day. At Südbahnhof, the trains end and transfer to the opposite direction at the turnaround facility. That means wear and tear.

Just under 15 people are needed for the various tasks involved in changing the points. The special thing about a construction site in the tunnel, however, is the logistics in advance. The new points, the construction material and the equipment have to be brought to the site. This task is performed by so-called rail transport trains.

The total cost is about 200,000 euros. However, that will not be it yet. In a second construction phase, another switch replacement is due at the beginning of 2018.