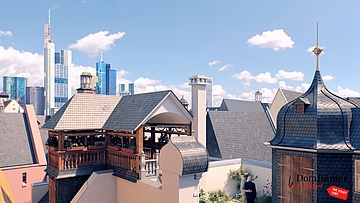 (kus) The reconstruction of Frankfurt's Old Town is a beacon project that is attracting attention beyond Germany's borders. On Tuesday, October 4, visitors to this year's EXPO REAL real estate fair in Munich were able to experience for the first time what the finished ensemble of 15 faithful reconstructions and 20 new buildings will look like in detail from 2018.

"With the reconstruction of the Old Town, the city of Frankfurt is committing to its historical roots," said Lord Mayor Peter Feldmann at the presentation. "Anyone walking through the finished quarter can see the different development phases of Frankfurt's urban history in the houses. With the current visualizations, you can already get an idea of how impressive the new Altstadt will be."

Planning Director Mike Josef is also already looking forward to the completion in 2018. "The new Altstadt is making an important contribution to Frankfurt's inner city development. A unique district is being created between the cathedral and the Römer, a lively mix of apartments, shops, restaurants and caf&eacute;s - citizens and guests from all over the world will feel at home here."

Michael Guntersdorf, managing director of DomRömer GmbH, which has been commissioned with the construction, reported at the presentation on the current status of the work and gave an outlook on the coming steps. "At the moment, almost all of the 35 Old Town houses are completed in their shell construction. On October 15, 2016, we will celebrate the topping-out ceremony. The first buildings are already being cleared of scaffolding. The work will be completed at the end of 2017, and the quarter will be fully occupied in the course of 2018. In 2018, we will open the Old Town with a big celebration for the citizens."

For the new visualizations, the City of Frankfurt relies on modern technology: The area was filmed by drone flight, and the HHVISION team also filmed with several cameras in the town hall and on the construction site. The 3D model of the quarter is based on the final plans. The visualizations can thus depict, for example, the later color scheme of the houses. Architectural details such as the "Belvederchen", a roof garden on the house "Goldene Waage", are also part of the visualizations