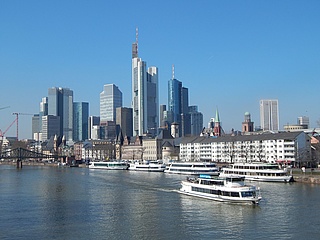 The new year also brings many cultural highlights for Frankfurt once again. In addition to the established city festivals and sporting events, the museums will once again offer numerous exhibition highlights. And also the Luminale will make Frankfurt shine again in 2018 - with a new concept and many great installations. Here's a little preview of the first half of the year:

Not entirely new, but extremely successful and on view until May 6 is "Jil Sander. Präsens", the first show ever about the work of the fashion designer from Hamburg, shown at the Museum Angewandte Kunst, prepared by its director Matthias Wagner K. The MMK Museum für Moderne Kunst is also starting the new year with the tried and tested. "A Tale of Two Worlds. Experimental Latin American Art from the 1940s to the 1980s in Dialogue with the MMK Collection" runs until April 2.

Rubens at the Städel, Basquiat at the Schirn

Städel and Schirn bring two heavyweights to Frankfurt in February. From 8 February to 21 May, the Städel will be showing "Rubens. Power of Transformation", the Städel is showing around 100 works by the Flemish master and devoting the show to a hitherto little-noticed aspect of his creative process: Rubens' dialogue with artworks by famous predecessors. Paintings, drawings, prints and sculptures by Rubens are shown together with works by Titian, Tintoretto, Rottenhammer, van Tetrode and more.

U.S. artist Jean-Michel Basquiat is the star at the Schirn from February 16 to May 27. 30 years after the last presentation of his work in Germany, the Kunsthalle is showing "Basquiat. Boom for Real", a survey show highlighting the graffiti artist, painter and draughtsman's relationship to music, text, film and television. Jean-Michel Baquiat lived from 1960 to 1988 and is considered one of the most important artists of the 20th century. After the show ends, the Schirn Kunsthalle will be renovated from June to September, but will be open in parts.

Everything new, almost all Kentridge

Reopening in new rooms and with a new name in February will be the Children's Museum, which will then be called the "Junges Museum", returning to the Saalhof after ten years on the Hauptwache. Its parent company, the Historisches Museum, is once again inviting all Frankfurt residents to its city laboratory in 2018. Under the title "How do people live?" visitors can explore today's living realities together. The City Lab kicks off on January 31, and the research results will be presented in the museum's exhibition rooms starting in May 2019.

The curators of the Liebieghaus have come up with an extraordinary project. From March 22 to August 26, they are inviting the South African William Kentridge to occupy 32 rooms of the house. His installations and room-filling works will enter into dialogue with the sculptures in the Liebieghaus collection.

The Deutsches Architekturmuseum is showing from 27. January to May 6 in "DAM Prize 2018," the 25 best buildings in and from Germany, and from March 24 to May 13 with "Great Opera - Much Theater?" Stage Buildings in European Comparison. Just one month later, on 21 April, "Fahr Rad! The Reconquest of the City". Right next door, the German Film Museum is celebrating the 50th anniversary of Stanley Kubrick's "2001: A Space Odyssey". The party runs from March 21 to September 16.

"Bankers, brothels & Boh&egrave;me" - the Institute of Urban History invites its visitors to explore the stages of the history of the station district. Built at the end of the 19th century as a modern showcase district between the city centre and the then Centralbahnhof, it became one of the three global fur-trading centres in the still young Federal Republic and soon also the heart of Frankfurt's red-light milieu. From the classicist villas to the bank towers, from the drug scene to gentrification - from 29 May to 7 April 2019, visitors can trace the eventful history of Frankfurt's smallest district.

Several Frankfurt houses are participating in "RAY Fotografieprojekte Frankfurt/RheinMain 2018". Under the title "Extremes", the triennial asks questions such as: In view of the digital flood of unfiltered and uncensored images, what is still considered extreme at all? From May 24 to September 9, the MMK Museum für Moderne Kunst will seek answers in its main building on Braubachstraße with the show "Contemporary Nomads. Cao Fei, Richard Mosse, Paulo Nazareth". The Museum Angewandte Kunst is showing works by Antoine D'Agata, Martin Liebscher, Inez van Lamsweerde and many more during the same period.

By the way: In all municipal museums, admission is also free this year for children and young people as well as students of Goethe University and the University of Applied Scienes.

Festivals for young and old, indoors and outdoors

Specially aimed at children and young people is the international theatre festival "Strong Plays", which will be celebrated in Frankfurt and the region from 27 February to 12 March. From 18 to 23 March, international light artists will be performing in various locations at the Luminale 2018, illuminating facades and objects in Frankfurt and Offenbach. To highlight one example: The Italian design studio Karmachina shows on the facade of the Alte Oper its history from foundation to destruction to reconstruction.

On May 5, the art houses, off-spaces and exhibition spaces of both cities invite visitors to roam their spaces, eat, drink and party until the early hours of the morning at the Night of the Museums. From June 4 to 10, visitors to "literaTurm - Literaturfestival FrankfurtRheinMain" can watch readings, talks and discussions in high-rise buildings and other unusual venues.

Where things are going round - festive and sporty

Frankfurt's folk festival year starts early in 2018 - with the Spring Dippemess, whose rides tickle the nerves from 23 March to 15 April at the Festplatz am Ratsweg. From 19 to 22 May, the city celebrates its national holiday with four days of funfair in the Stadtwald, and from 27 June to 6 July, the Opernplatz becomes an open-air food mile at the festival of the same name.

May is traditionally ushered in in Frankfurt with the cycle race - attention, new name - "Eschborn-Frankfurt". On May 9, the 9th Frankfurt Rowing Festival kicks off on the banks of the Main River, and on June 7, thousands of runners gather for the J.P. Morgan Run through the streets of downtown