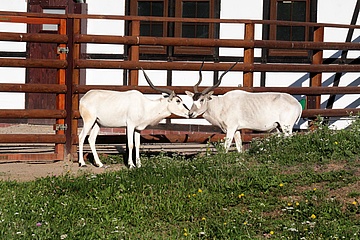 (kus) Early in the morning on Wednesday, August 9, the time had come: the three-and-a-half-year-old Paddy was allowed onto the large grounds of the Frankfurt Zoo for the first time together with the three Addax females. Beforehand, the four had already been able to get to know each other at the fence. Frankfurt Zoo has kept the highly endangered antelope species since September 2016 - now it is hoped that offspring will appear in due course.

"He is already quite impressive - our new Addax buck, who has come to us from Marwell Zoo in England. For his three and a half years, he's big and muscular. Of course, the twisted horns typical of the species are particularly beautiful," Zoo Director Professor Dr. Manfred Niekisch is pleased about the new arrival. "Now we hope that he gets on well with the three females and that the group quickly finds its way together, because the Addax antelopes, which are also called Mendes antelopes, are so highly threatened that it is important to build up a stable population, at least in the zoos," explains Niekisch.

Addax antelopes (Addax nasomaculatus) belong to the horse bucks. Their original range was once northern Africa, across the Sahara to Sudan. Today the species is extremely endangered. Current figures from the World Conservation Union (IUCN) suggest fewer than 100 animals survive in two small areas in Niger and Chad. Poaching with modern long-range weapons and habitat loss, also due to the exploitation of oil deposits, are the reasons for the decline of the once widespread population. Currently, addax are kept in only six zoos in Germany, and in a total of another 34 in the rest of Europe.

Because it can get very hot in the rocky deserts and semi-deserts, the antelopes are most active in the twilight hours when it is a bit cooler. Unlike their related species, the Addax can survive for long periods without water, as they cover their moisture requirements with their food, i.e. grasses, herbs and roots. The animals are very sociable and often live in family groups, which usually consist of one male and several females with their young. However, they are also encountered as solitary animals.

Besides Paddy, Tinne, born in March 2014, one and a half year old Tommie and two year old Jeanne live at Frankfurt Zoo.