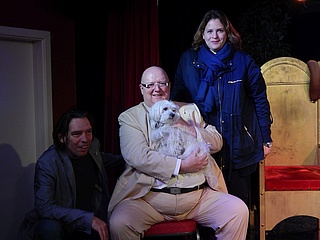 It will be a farewell with one laughing and one crying eye for Thomas Bäppler-Wolf, when his small Theatrallalla Theater on Friedberger Landstraße will close its doors for good after the coming season. He did not take the decision lightly. But since the area is soon to be redeveloped and thus a relatively short-term termination of the lease would always be looming and the theater operation, which has to get by completely without subsidies, no longer cost-covering - especially in a hot summer like 2018 - Thomas Bäppler-Wolf saw himself forced to pull the ripcord. The final curtain will fall here at the end of April/beginning of May 2019.

Thirty years ago, the former dance teacher opened his dance school in the premises, before also using it regularly for his shows as Bäppi La Belle 25 years ago. With the closure of the Volkstheater came the decision to use the Theatrallalla as a permanent theatre. Some very successful productions followed, such as the wonderful hit revue "Verliebt, Verlobt, Verheiratet", the musical adaptation of "Das Haus in Montevideo" or most recently the Agatha Christie parody "Miss Moppel: 16.50 nach Offenbach", which gave the theatre a proud 98% occupancy rate.

For Bäppler-Wolf, the end of the Theatrallalla is no reason for sadness: "Even if some would like to see it, Bäppi is not retiring," he promises and adds: "This is not goodbye!". So in the future, the plays will be performed in community centers and cider pubs that have the capacity. And the Bäppi show will also go on tour in 2019 until a new home is found for it. Because together with Gabriel Groh, with whom he has already collaborated on many productions and hosted the popular Pik Sonntag once a month at the Pik Dame, Bäppi wants to open a new cabaret theater. The only thing left to do is to find a suitable location with room for a maximum of 60 people, which would then be the new home of Bäppi's show in the future.

Besides theatre and show Bäppi has some other hot irons in the fire. The entertainer will definitely not get bored. His Thermomix show, which always sells out quickly, will continue and the guided tours of the old town will also continue after a Christmas and Shrovetide break. In addition, Bäppi is working on a book about Frankfurt's Old Town together with journalist Nicole Breevord, who wrote for the Journal Frankfurt for many years. The book, which will be self-published in March 2019, will be a mixture of illustrated book and special stories about the old town - whereby the whole thing will not be limited to the area of the so-called "new old town". One can be curious.

And then, of course, Bäppi is coming to the movies. At the moment the Bond parody "Specktre" is still in the elaborate post-production, before it will celebrate its big premiere on November 06 at Kinopolis in the MTZ. Bäppi is so enthusiastic about the shooting experience and the result that he now plans to shoot a very special Frankfurt film every year. "The Return of the Bembel Knights" could become a reality in the process, as could a film version of "Miss Moppel" or the very elaborate project "Nights at the Historical Museum".

So there can really be no talk of a farewell. But there is talk of the end of a period that certainly represents a loss for Frankfurt's cultural scene - but also the beginning of something new that can certainly compensate for this loss in the long term. If you want to use the new season to say goodbye to the Theatrallalla once again, you can find <link http: www.theatrallalla.de _blank> HERE all the info on plays, times and tickets.