Night of the Museums 2017 - Program was presented
from FFM Aktuell 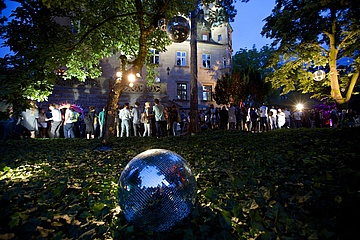 Photo: Night of the Museums

On May 6, it's finally that time again. Then in Frankfurt and Offenbach already for the eighteenth time about 40 museums, numerous galleries in Frankfurt and other selected venues open their doors for a night full of culture, fun and events of a very special kind. For only 14 euros, visitors can then enjoy a varied program between 7 p.m. and 2 a.m. with guided tours of the various exhibitions, live music, parties, readings, video performances, dance, workshops and many other interesting offers. Four different shuttle bus lines will take visitors from venue to venue, and food and drink are also guaranteed everywhere. The Night of the Museums will be celebrated again this year not only in the city centre, but also in locations in Offenbach and Höchst. Also at the new port place in Offenbach and in the 54th floor of the Main Tower can be celebrated this year the NIGHT OF THE MUSEUMS.

Some program highlights in 2017 are:

An opening, an anniversary and new off-spaces: The Gallusviertel, with the historic Galluswarte, the industrial monument Adlerwerke, the Kulturgelände korrekt, the Güneş Theater-Areal and the Kulturtreff "Kriegkstraße 12", will be the focus of the night in Frankfurt for the first time. Here, spring will be welcomed with Anatolian fire jumps, a highlight is the reading by cult author Wladimir Kaminer, who will also take to the turntables as DJ of the "Russendisko" at a later hour. Musically, the offer ranges from ethnic pop by the band Balkan Beat to jazz improvisations in the boxing ring by The WhereMe? Open studios with glowing balloons and group exhibitions as well as guided tours through the Wartturm and the district show the cultural diversity and creativity of the independent scene that shapes the district.

In Offenbach, the new Hafenplatz will be inaugurated with poetic songwriter pop by shooting star Mine. Akua Naru brings jazz rap for the heart, hips and mind to the stage, while the disused harbour crane is illuminated. A few streets away in the German Leather Museum, visitors can toast 100 years of museum history with May punch to the sound of jazz. Masterpieces of lithography can be seen in a joint exhibition at the Haus der Stadtgeschichte and the Klingspor Museum.

The Museumsufer entices visitors with art, picnics and live theatre: the Schirn Kunsthalle presents the painter Ren&eacute; Magritte, the important surrealist and master of deception, while the Deutsches Filmmuseum shows the many facets of colour in film with the lively exhibition "ROT". The radio play thriller "Sherlock Holmes - The Hound of the Baskervilles" will be staged in the new Historical Museum, while the classic show Ruck Zuck with Roberto Cappelluti will bring the 90s back to the Museum of Communication. Surprising performances at MMK 1 and the Kunstverein, as well as a 50s fashion show at Museum Giersch, provide new perspectives. The Museum Angewandte Kunst invites you to a "picnic time" in the open air, and young Frankfurt and Offenbach art can be bought at the EY benefit auction. Open air, the theatre ensemble Antagon delights the audience with fire acrobatics on the Römerberg, and along the museum bank strolls the giant-illuminated Dundu doll.

Experience even more: For the first time, the 54th floor of the Main Tower offers breathtaking views as The Treadmill Runner entrusts the speed of his treadmill to the audience in an interactive performance. Rare insights are provided by guided tours through the Fishermen's Vaults, the Kaisersaal and the catacombs of the Main Station. There will be stand-up comedy with Rabbi Walter Rothschild in the Museum Judengasse, and a cartoon reading with Ari Plikat will take place in the caricatura. There will be animal excitement when the police dogs show off their skills at the Kriminalmuseum, while lions and seals are fed at the illuminated zoo and cockroaches race each other at the Senckenberg Naturmuseum. The "Breaking Bad Science Show" at Experiminta shows just how amazing chemistry is, and the Money Museum explains how to spot counterfeit money.

Celebrate for spring fever: electronic synthesizer sounds from The OhOhOhs and DJs from the Robert Johnson make the Architekturmuseum shake, while the Portikus is filled with punk. The MMK 2 bar also invites you to dance with DJ Nuri. At the Städel, Disco Boogie will provide the right beat, and party-loving night owls will enjoy club sounds with a skyline view on the roof of the Skyline Plaza.

Good to know: The Night of the Museums ticket costs 14 euros in advance and at the box office and is available at all participating venues and AD ticket/reservix VVK outlets nationwide. It includes admission to all participating venues and is also a ticket for the nightly shuttle buses, the historic tram and the shuttle boat that runs between the Städel and the Eisernem Steg.

In 2017, for the first time, there will also be a low-priced family ticket for 29 euros in advance and at the box office; this is valid for two adults and their own children/grandchildren under 18. In addition, a reduced-price ticket is available for 9 euros (advance booking and box office; only valid together with photo ID) for children under 18, schoolchildren, students, people doing federal voluntary service, the unemployed, severely disabled persons and Frankfurt Pass/Culture Pass holders. Admission is free for holders of the MuseumsuferCard. It can be purchased at selected museums during the night and costs 85 euros per year.

Further information for visitors is available at

The Cultural Office is accompanying the 2017 Night of Museums on social media using the hashtag #ndmffm. As in previous years, the event will be featured on