Nightly full closure of the Theater Tunnel
from FFM Aktuell 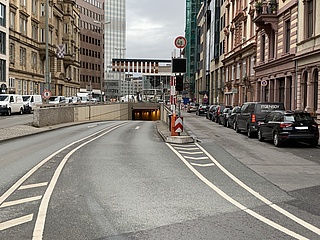 It is now exactly 20 years ago that the Tunnel Rave took place for the last time in the Theater Tunnel. From 1994 to 2002, the tunnel was transformed for two days a year into a very special party location for all techno fans. There's no question that after such an event, the first thing to do was to clean up. But even though that was two decades ago and the tunnel has really only been used by cars since then, regular cleaning is of course still necessary. And if this is pending, then the tunnel must be closed to vehicles.

From Monday, April 25, to Friday, April 29 is it once again so far. Then necessary maintenance and cleaning work is due in the Theater Tunnel to guarantee the functionality and traffic safety of the tunnel. For this purpose, the two-lane tunnel system will be fully closed at night throughout the aforementioned period. Passable is the theater tunnel with the exception of Wednesday, April 27, in each case during the day from 7 am to 9 pm.

During the full closure, the Office for Road Construction and Development (ASE) cleans the tunnel system, the emergency exits, the roadway and the ramp inside and outside. Among other things, the shaft covers and emergency exit flaps are maintained. During the semi-annual work in the tunnel facilities, the city takes care to minimize the impact on road traffic. Since, in addition to the usual maintenance and cleaning work, a repair of the road surface is also due this time, the ASE will also work during the day in the Theater Tunnel on Wednesday, April 27. In the process, the roadway will be milled on the east portal ramp at the points where there are damaged areas and grouted with fresh asphalt - for more driving comfort in the Theater Tunnel.

Further current traffic information can be found at www.mainziel.de