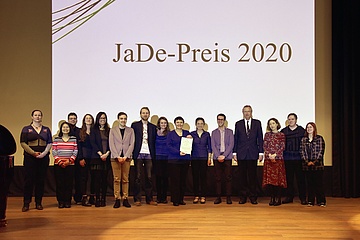 The non-profit association Nippon Connection e.V. has been organizing the largest Japanese film festival in the world since 2000 - and in beautiful Frankfurt am Main! With a lot of enthusiasm and hard work, the makers of the festival manage year after year to show top-class premieres, to bring filmmakers to Frankfurt and to offer the enthusiastic audience an exciting insight into Japanese cinematic art. And this has now been honoured: Nippon Connection e.V. was awarded this year's JaDe Prize. The prize, endowed with 4,000 euros, was awarded by the JaDe Foundation on Saturday, February 15, 2020 at the Japanese Cultural Institute in Cologne. Festival director Marion Klomfaß accepted the award on behalf of the approximately 70-member team.

With the award, the Foundation for the Promotion of Japanese-German Scientific and Cultural Relationships particularly recognizes the volunteer commitment with which the association organizes the world's largest annual festival of Japanese film in Frankfurt am Main. The 20th Nippon Connection Film Festival will take place this year from June 9 to 14, 2020.

Crowdfunding to finance the anniversary edition will run until March 1, 2020.Through the website Startnext.de/NipponConnection20, supporters can donate a freely chosen amount to the festival and choose from a variety of thank-you gifts.

With more than 100 short and feature-length films and around 50 cultural events, the Nippon Connection Film Festival offers an extensive program on Japanese film, art and culture. Numerous filmmakers and artists from Japan present their works here in person. The venues in 2020 are the Künstlerhaus Mousonturm and the Theater Willy Praml in the Naxoshalle as well as the DFF - Deutsches Filminstitut und Filmmuseum, the Mal Seh'n Kino, the International Theater, the Harmonie Kino and the Naxos Atelier.

For more information on the festival, please visit: www.NipponConnection.com