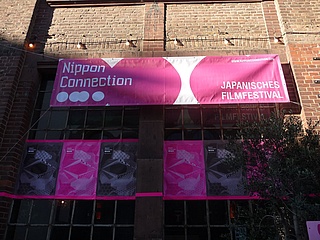 As we already reported, the twentieth edition of the Japanese film festival NIPPON CONNECTION cannot take place as planned this year. Especially for film lovers, the cancellation of this worldwide biggest festival for Japanese cinema is a great cultural loss. But the makers have put a lot of commitment and imagination into creating an online programme that will lack a little flair. But this online edition of the festival is definitely a good alternative. A few days before the start of NIPPON CONNECTION ONLINE, the programme is now complete.

Interested parties can discover over 70 short and feature films from home from 9 to 14 June 2020. The very diverse film programme will be available to digital festival visitors* via the Vimeo platform. The special thing about it is that more than half of the films will also be available outside Germany. Thus, the international character of the festival is also guaranteed for the online edition. Under the title Nippon on Demand, the films can be accessed for 24 hours during the festival for a rental fee. Each film and short film programme costs 5 euros. Reduced-price 10 tickets are available in advance on the festival website. The daily live offer Nippon Connected with concerts, lectures and workshops invites you to discover Japan's multi-faceted culture online. The complete programme is available on the website NipponConnection.com. Participation and ticket links to the films and events are available via the respective event page.


As one is used to from the beautiful festival in the past years, Nippon Connection Online will also feature numerous outstanding productions from Japan. One highlight, for example, is the docu-drama Family Romance, LLC by Werner Herzog, which premiered last year at the Cannes International Film Festival. More than half of the productions from the programme will have their German, European or international premiere at the festival. This is a real highlight of the festival, and the online edition remains true to this motto.</Eiichi Imamura, for example, will present his zombie road movie <strong>Beautiful, Goodbye and Michio Koshikawa the emotional family story After The Sunset as an international premiere. Eisuke Naito's drama Forgiven Children, as well as Keisuke Imamura's directing debut Yan, will be shown within Europe for the first time. Also The Journalist by Michihito Fujii, who has won three Japanese Academy Awards, will celebrate its European premiere at Nippon Connection Online. Also the latest work Dancing Mary by cult director SABU and the last feature film Labyrinth of Cinema by the recently deceased directing legend Nobuhiko Obayashi have never been presented to a German audience before. This year's film programme is dedicated to the thematic focus Female Futures? - New Images of Women in Japan, which is supported by the Kulturfonds Frankfurt RheinMain. The focus reflects the role of women in contemporary Japanese cinema in numerous films, a lecture and a panel discussion. On the occasion of the 20th festival anniversary, a small selection of cinematic highlights from past festival editions will be shown in the program section Best of Nippon Connection.

The Nippon Docs section will show a particularly exciting documentary film programme on the occasion of the 20th anniversary of Nippon Connection, with a special focus on female filmmakers. For example, Haruka Komori, who for Listening To The Air accompanied a radio presenter for five years in her work in a small Japanese town that was destroyed by the Tohoku earthquake in 2011. In her documentary film, which will be shown as an international premiere, the director, who received the Nippon Visions Jury Award in 2018, tells of personal stories and everyday life after the disaster.

The Nippon Animation section presents innovative productions ranging from current anime blockbusters to independent short films. With the visually stunning science fiction love story Hello World, Tomohiko Ito transports his audience to Kyoto in the year 2027. Tatsuyuki Nagai is known for his award-winning anime series Anohana: The Flower we saw that Day (2011) and in Her Blue Sky deals with the union of two sisters whose fates unexpectedly change. The two animated feature films will have their German premiere in the 20th edition of Nippon Connection. As part of the short film series Constant Metamorphosis - Independent Animated Shorts By Women, independently produced animated films by women directors will be presented.

The Nippon Online Award will be presented for the first time as part of the virtual edition of Nippon Connection. The prize, a subtitling for the next film, is donated by the Japan Visualmedia Translation Academy (JVTA) from Tokyo. Nominated are all feature films of 60 minutes or more in the NIPPON VISIONS and NIPPON DOCS sections. The audience decides who will receive the first Nippon Online Award by means of an online voting.

Nippon Connected offers a varied supporting programme around Japan with around 40 online concerts, performances, workshops and lectures. Many events are available free of charge via the daily livestream on Vimeo. The festival kicks off with the live opening of the festival on June 9 at 6 pm and a subsequent opening concert with traditional music from Okinawa. Highlights of the festival include an audiovisual performance with the Duo Usaginingen, Japanese comedy with the Rakugo narrator Katsura Sunshine in the live stream from Tokyo and a concert with the electronic trio Sawa Angstrom from Kyoto. The audience can also look forward to many opportunities to join in, such as origami wrinkles, Japanese radio gymnastics and online karaoke. At Nippon's home cinema At Home, it's time to sit back and relax: Cult director Jörg Buttgereit and film scholar Marcus Stiglegger will live comment on a jewel of Japanese genre cinema from the 1960s. A panel discussion with three of this year's directors on the topic of Female Futures? will provide an opportunity for dialogue in the subsequent Q&A. Another panel with representatives of the Japanese film and cinema scene will discuss the effects of the Corona crisis on the Japanese film industry. In addition, pre-recorded Film Talks will give interested parties the opportunity to learn more about the work of the filmmakers and the creation of their works.

The Nippon Kids series has a wealth of discoveries in store for young Japan fans. In an online cooking course, colourful dango rice balls can be prepared and in the virtual drawing workshop, beastly manga figures can be created easily. The programme also includes a Japanese course for kids and a fairy tale lesson in the tradition of the Japanese paper theatre Kamishibai. An exciting selection of animated films in the German dubbed version is of course also included.

The festival homepage NipponConnection.com is also shining in new splendour for the 20th anniversary edition. Here you can find detailed information about the films and online events and watch the daily live stream, video messages and interviews. Those who really want to get into the mood for Japan will find a wide range of offers about Japan on the new virtual market place as well as tips for the next (virtual) trip to Japan. Various suppliers present Japanese delicacies, a very special selection of DVDs and books or handmade souvenirs and works of art at Nippon Market.

It's really great what the festival's mostly volunteer employees have put together here to offer visitors a real alternative to the actual NIPPON CONNECTION festival. You should definitely support this by watching as many films and programmes as possible. We will definitely be there! The complete programme is available on the festival website: NipponConnection.com