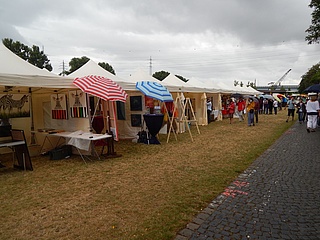 (ffm) On Saturday, June 30, the <link https: www.frankfurt-tipp.de veranstaltungen s event hoechster-schlossfest-1.html _blank>Höchster Schlossfest will begin, among other things, with an art market at the Mainufer. The construction site for the renovation of the damaged bank reinforcement at the Höchster Mainufer will be reduced to a narrow strip until then, so that the Höchster Schlossfest will not be affected.

Pedestrian and cyclist routes will be unrestricted during the Castle Festival. Construction fencing will partition off a strip of riverbank about two metres wide and 450 metres long to the new seawall. The restoration of the area previously used by the construction site will be carried out in close coordination with the Vereinsring Höchst. Most of the construction work will be at rest during the Schlossfest, with only minor work being carried out from the water.

The Main riverbank in the Batterie area has been under renovation since October last year. Damage to the sheet pile wall, which is almost 100 years old, was discovered in 2015 and required an immediate measure to stabilise it and a lasting restoration. The stabilization took the form of a pre-fill of granular material and armourstone in front of the damaged seawall. The rehabilitation measure is divided into three sections. In the two peripheral areas of 90 and 120 metres, the existing sheet pile wall was rehabilitated by means of new anchoring and waling. In the middle section of about 150 metres, the damage was so severe that a new sheet pile wall had to be placed in front of the old one. This work is ongoing.

Completion was planned for August 2018, but it will take about four weeks longer to complete all the work. As the scheme is being carried out on an existing structure, not all contingencies could be planned for. For example, when backfilling the voids in the existing seawall, it became apparent that there were significantly more voids behind the nearly 100-year-old seawall than suspected. The filling of these cavities took longer than planned. The weather also contributed to the delay: A period of high water at the turn of the year caused work to be interrupted for almost three weeks.

Once the work is completed, the citizens of Höchst will be able to enjoy a new green strip in a prime location. "The new sheet pile wall will create a platform of 450 square metres on the banks of the Main in Höchst. The new green space in an attractive location on the banks of the Main will invite people to relax and linger," says city councillor Markus Frank. The sheet pile wall, which will be built three metres in front of the old bank reinforcement, will end with its upper edge about one metre lower than the existing bank for flood protection reasons. It will be equipped with park benches, trash cans and lighting. The Main riverbank promenade and the new, lower area will be connected by ramps and stairs, so that the lower area will also be accessible to passers-by without barriers.

The renovation measure has been coordinated with the Waterways and Shipping Administration WSA Aschaffenburg, the Parks Department, the Office for Road Construction and Development and the Road Traffic Department, among others. The construction measure is being carried out by the company Colcrete-von Essen and the engineering office Schumacher. The overall coordination lies with the municipal HFM Managementgesellschaft für Hafen und Markt on behalf of the City of Frankfurt am Main