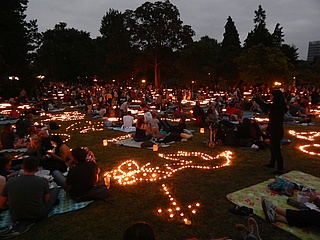 The hope for more normality in the summer is great and justified. But the level of infection is currently still too high and too unpredictable to give planning certainty to major events planned for the summer. And so popular events such as the Museumsuferfest or the Bahnhofsviertel night had to be cancelled a few weeks ago. Now the Palmengarten has also announced: There will also be no Rose and Lights Festival in the summer of 2021. The Palmengarten has now officially announced this on its Facebook page.

The highlight of the beautiful rose exhibition attracts thousands of people to the Palmengarten year after year, which is then transformed into a veritable sea of lights from nightfall. With tea lights, the visitors sometimes create real works of art. A colourful music programme and the traditional fireworks are of course also part of the event. Even though the Festival of Lights is held in the open air, a large event with several thousand people is simply too risky this year. But despite the sad news of the repeated cancellation of the Rose and Lights Festival, the anticipation of course remains for 2022, when hopefully we can all experience such beautiful major events together again.

And especially in the anniversary year, even without the festival, there are many good reasons to pay a visit to the Palmengarten once again. More info is available at: https://www.palmengarten.de/de/index.html