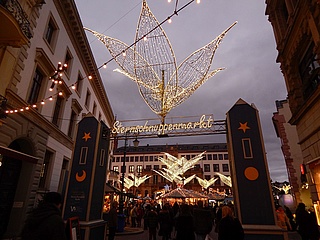 The list of Christmas markets in major Hessian cities that could take place this year is getting shorter and shorter: Frankfurt? Canceled despite elaborate hygiene concept and planned equalization of market events (we reported HERE). Hanau? Cancelled. Bad Homburg? No Christmas market at the castle and also ice rink and ice magic in the Kurpark are cancelled in 2020! A trip to Gießen also does not have to be undertaken, because here too the Christmas market has already been cancelled. Now Kassel and Wiesbaden are also joining in.

No shooting star market in Wiesbaden, ice age is on the brink

The administrative staff of the state capital Wiesbaden has in its meeting on Friday, 30. October, decided to cancel the popular shooting star market because of the current Corona situation. "It was a very difficult decision to make. But under the given circumstances, it is not possible and responsible to carry out the shooting star market," regretted Mayor Gert-Uwe Mende and Mayor and Head of Health Dr. Oliver Franz. Nevertheless, in order to create a pre-Christmas atmosphere in the city centre, the Christmas tree on Schlossplatz and the Christmas crib will be set up as planned. Likewise, the pedestrian zone, Wilhelmstraße and Schlossplatz will be atmospherically decorated with Christmas lights. The ice rink, which had already been planned under special conditions, will also not be able to operate due to the further restrictions imposed by the new regulations of the state government, which will take effect on Monday, November 2. Currently, it is still being examined whether the implementation can be realized from mid-December to January 10, provided that the then given infection situation and the corresponding regulations allow this. Also the Winterstubb is also not feasible under the given Corona regulations.

At the Rhineland-Palatinate neighbors in the state capital Mainz it looks unfortunately no better. Here, too, there was a cancellation yesterday, Friday: "In view of the high incidence rate in the state capital, we cannot justify an opening of the Christmas market with a clear conscience. Therefore, it is logical and inevitable to set the cancellation. The fact that we are all doing this with a very heavy heart does not need to be emphasized separately", explains Lord Mayor Michael Ebling. Head of Economic Affairs Manuela Matz adds: "Of course we will try, together with various actors, to create an Advent atmosphere in the pre-Christmas period despite the difficult situation. But now it is primarily about that we all adhere to the rules and recommendations and come together through this hard time, so that we can then hopefully carry out a normal Christmas market again next year."

No happy ending for the fairy tale Christmas market in Kassel

Also in Kassel those responsible have not made it easy. But given the current situation, the Kassel Fairy Tale Christmas Market, which would have opened on November 23, can not take place. "We have long weighed up whether the Christmas market would be possible in another format. But in view of the current situation, additional social contacts and encounters must be kept to a minimum," says Kassel's Lord Mayor Christian Geselle. For him, however, it is important that a Christmas atmosphere can still be felt in the city. The Christmas lights are currently being installed, and talks are underway with the city merchants and showmen. "Traditions and Christian values should continue to be cultivated, they give us orientation, security and support. We need that more than ever at this time."

No final decision has yet been made in Offenbach. However, the likelihood that the Christmas market will take place here is more than unlikely given the current situation. We will stay tuned and keep you updated.