Now it's certain: DFB Academy is coming to Frankfurt
from FFM Aktuell 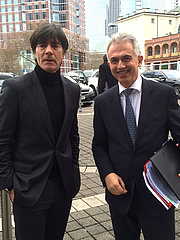 For Frankfurt as a sports city, it was an important decision that was made today when the highest body of the German Football Association (DFB) met at the CongressCentrum. The 258 voting delegates from the state and regional associations as well as the league association unanimously approved the ambitious new construction of a DFB performance centre on the former racecourse site. This means that the long-delayed project can now finally get underway.

Peter Feldmann, a self-confessed Eintracht and football fan, was delighted with this unequivocal decision: "This means that another milestone has been reached on the road to the DFB Academy in Frankfurt am Main: regular team training with our national coach Jögi Löw is now within Frankfurt's reach," said a delighted Lord Mayor Peter Feldmann, who addressed the participants at the DFB Bundestag, which met in the CongressCentrum at the Messe. "When the DFB-Bundestag is convened again in three years by rotation, the delegates will already be able to enjoy the dreamlike skyline view at the new location of the DFB Academy."

Sports Director Markus Frank expressed his thanks for the trust that the highest body of the German Football Association has placed in the city of Frankfurt am Main. "The path to the DFB's lighthouse project in the Main metropolis was not easy. But the dream of the new performance centre with its sporting and also economic possibilities has motivated the entire team, which fought for today's decision, to persevere."

Mayor Peter Feldmann and Councillor Markus Frank likened the academy's development so far to an exciting international match with extra time and a penalty shootout, but one in which the rules of fair play were disregarded. "The fact that in the end the better team can walk off the pitch as the winner is thanks to the DFB officials on site, who persevered and played fair." Feldmann and Frank then also direct their thanks for the pleasing "outcome of the game" to the head of the real estate department Jan Schneider and the former head of the planning department Olaf Cunitz. "Cunitz has kicked off with his area check and the creation of a development plan. Schneider has done an exemplary job in the context of the court hearings and the leasehold agreement."