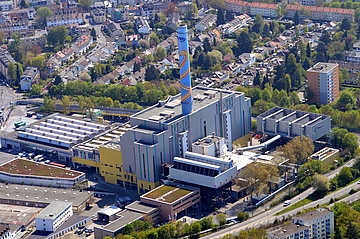 (ffm) Frankfurt's waste-to-energy plant is the most energy-efficient waste solution for the region. This is the conclusion of a new study by the Öko-Institut in Freiburg. It was recently commissioned by the city of Wiesbaden to clarify the ecological impact of a planned new waste-to-energy plant in Wiesbaden. The researchers used key figures for transport and incineration emissions, as well as quantities of electricity and heat extracted, to draw up the life cycle assessments of waste incineration plants from the Rhine-Main region. For this purpose, the Frankfurt operating company MHKW GmbH had supplied its corresponding figures.

The result of the comparison can be seen. "The planned plant in Wiesbaden must achieve an almost optimal energy use in order to catch up with the Frankfurt waste incineration plant in terms of ecological balance," the scientists conclude. The data from the Frankfurt plant are "good". So good, in fact, that a new Wiesbaden plant would not be able to catch up with the eco-balance according to current plans and economic forecasts even in 15 years.

Umweltdezernentin Rosemarie Heilig: "Our waste incineration plant is one of the most modern in Europe. In this respect, I am not surprised that even newly planned plants have a hard time achieving similarly high efficiency values. Both economically and ecologically, it would certainly make more sense to exploit capacities in existing MHKWs, for example in Frankfurt and Mainz."

The owner of the Frankfurt waste incineration plant is the municipal utility group of the city of Frankfurt. The operating company MHKW is formed in equal shares by the Frankfurter Entsorgungs- und Service GmbH and the energy supplier Mainova. The MHKW currently feeds over 200,000 megawatt hours of electricity into the public grid and almost 500,000 megawatt hours of hot water into the district heating grid per year. Converted to the annual average consumption of a two-person household, the quantities of the MHKW can supply more than 60,000 households with electricity. Mainova's district heating network fed by the MHKW supplies around 30,000 households in Frankfurt. Further expansion and optimisation of the district heating network should further improve this energy balance in the coming years