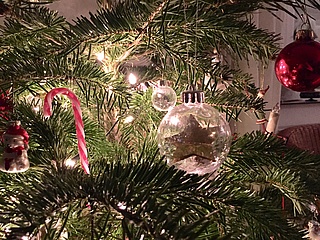 Ach, how it was nice again - Christmas with a colorfully decorated tree in the living room. But as wonderful as it is when the lights on the tree brings a little extra warmth into your own four walls, there comes a time when the little tree has to disappear again - at the latest when there are more needles on the floor than on the tree. Then it is once again a question of: where to put the disused Christmas tree? The Frankfurter Entsorgungs- und Service GmbH (FES) offers the Frankfurters again this year two options of disposal.

Variant 1: The Christmas tree is disposed of as before during the month of January either via the brown bio bin, the gray residual waste bin or during the statutory street cleaning. The prerequisite is that the trees are freed from all ornaments and shortened to pieces of no more than one meter.

Variant 2: For the fifth time, the now well-established collection tour with fixed dates for the individual districts will be offered again in 2020: This will involve the use of a special vehicle from Wednesday, 8 January, until Tuesday, 28 January, which will only collect Christmas trees. You can then simply place your decorated tree on the day of collection at the boundary of your property - i.e. easily accessible and clearly visible. If the trees are longer than two metres, FES also asks for them to be cut up.

Thursday, 9. January, in Seckbach and Bornheim

Friday, 10 January, in Oberrad and Ostend

Monday, 13. January, in Niederrad and Sachsenhausen-Nord

Alternatively, of course, Christmas trees can also be dropped off free of charge at RMB Rhein-Main Biokompost GmbH in Osthafen or as part of the car boot service at the FES recycling centres.