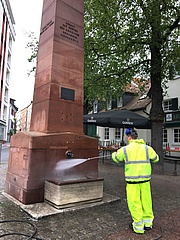 (kus) Wenn alle Brünnlein fließen, so muss man . putzen. The eight trainees, who on Tuesday, 25 April, at the high well in Bornheim, had slightly modified the folk song from the 16th century. They used professional equipment to get to grips with the almost 200-year-old structure on Obere Berger Straße, cleaning it of dirt and smears. Until the fountain finally shone in fresh splendor and now again invites people to refreshment.

The special thing about the cleaning operation: it does not cost the city of Frankfurt a cent. The Hesse Guild of Building Cleaners had offered the city the free cleaning, it was carried out by the company Antigraffiti-Rhein-Main/Gebäudereinigung Rüppel.

The trainees in the third year of apprenticeship were thus expertly instructed. This was also necessary, because the Hohe Brunnen is a listed building and must be cleaned particularly gently. Previously, the apprentices had spruced up the Bornheimer Brunnen at the Uhrtürmchen.

"We are happy to support the environmental agency's project to adapt to climate change," said Guido Hahn from the state guild. He added that the guild has been offering a nationally recognized course in historic building cleaning for 15 years. "We want to use professional well cleaning to point out the high standards that are set for our businesses."

The idea of free fountain cleaning was born at the Climate Change Ideas and Cooperation Exchange in December 2016, when the Frankfurt Environmental Agency and the Hesse State Guild of Building Cleaners reached an agreement to make refreshment fountains (old historic drinking fountains) more attractive again by cleaning them, thus contributing to climate change adaptation.

Peter Dommermuth, Head of the Environmental Agency, emphasized: "I am very pleased about the commitment of the Rüppel company, the guild and the apprentices. This commitment helps us in the effort to ensure a renaissance of public refreshment. In times of climate change and increasingly hot summers, this is becoming more and more important."

According to climate change experts at the Environment Department, however, there should be even more if the city centre heat islands in summer are to be defied and the quality of life improved. That's why the Environment Agency is looking for sponsors to install a freely accessible drinking fountain on their own property.

Water from Frankfurt's drinking water network also generally flows from the historic refreshment fountains, but because the water quality cannot be permanently checked, they cannot officially be called drinking fountains. They are all listed in an interactive city map: geoinfo.frankfurt.de/stadtplan .