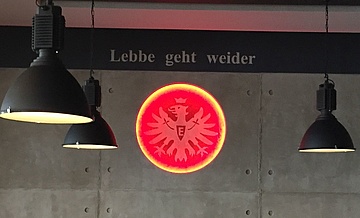 After much speculation, it is now certain: Oliver Glasner will succeed Adi Hütter as Eintracht Frankfurt's new head coach. The Salzburg native signed a contract today (Wednesday) until June 30, 2024. Before moving to the Diva vom Main, Glasner was coach at league rivals VfL Wolfsburg and led the Lower Saxons to fourth place in the Bundesliga table last season and thus to the Champions League next season - a dream that Eintracht were unfortunately unable to fulfil at the last moment. In Wolfsburg, Glasner still had a contract until June 30, 2022, so a transfer fee is due. How high this turns out, about it both clubs have agreed to silence.

"Oliver Glasner has proven over the past two years at VfL Wolfsburg that he is capable of working at an absolute top level and developing young players," said Axel Hellmann, spokesman for the board of Eintracht Frankfurt Fußball AG: "In our situation with a high turnover of personnel around the team, we deliberately went for a coach with experience from the Bundesliga and international competition. In addition, we quickly came to the conclusion that Oliver Glasner, with his playing philosophy, is a perfect fit for our team. We are convinced that he will continue the very successful path he has taken in Wolfsburg in Frankfurt as well."

Oliver Glasner says of his new challenge as coach of Eintracht: "Eintracht Frankfurt is an exciting club and has undergone great development in recent years. The emotionality in the city and the region around Eintracht is great and internationally renowned, not least after the great performances in the Europa League in recent years. We see Frankfurt as an opportunity to further develop a team at a strong level and are very much looking forward to this great challenge."

The 46-year-old family man Glasner spent the majority of his playing career with SV Ried in Upper Austria, where he was on the ball between 1992 and 2003 and between 2004 and 2011, playing 568 competitive games. The nine-time Austria U21 international played three more games for Linzer ASK in the 2003/2004 season. The business graduate began his coaching career at Red Bull Salzburg as Roger Schmidt's co-coach in the 2013/2014 season, followed by his first head coaching stint at SV Ried, who he led to a sixth-place finish in the table. From 2015 to 2019, he celebrated great success at LASK. With the team from Linz, Glasner qualified for the UEFA Europa League for the first time, and in his final year he finished second in the championship, his best result in over 50 years. In his first season with VfL Wolfsburg in 2019/20, Glasner finished seventh in the table with his team.