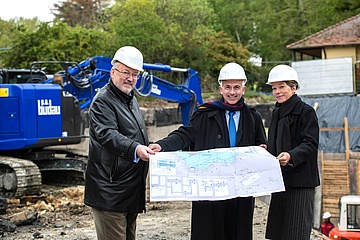 Of pond lowering and micropiles

(kus) A lot has happened on the construction site for the new penguin enclosure at Frankfurt Zoo since the first excavator broke ground in early December 2016. On 25 April - International Penguin Day - Lord Mayor Peter Feldmann and Ina Hartwig, Head of the Department of Culture and Science, visited the zoo to find out how the construction site is progressing.

It is above all the children who, when they visit the zoo, can hardly tear themselves away from the glimpses of the construction site at the moment. Too impressive is the deep hole directly at the large pond, where Humboldt penguins will draw their courses in the future. In addition, there is a large crane and various excavators - and every day there is something new to observe on the approximately 2,000 square metre site, because a spacious enclosure for Humboldt penguins is being built in the middle of the zoo and with it a new attractive visitor area. The new facility corresponds to a contemporary and species-appropriate animal husbandry and will provide space for a penguin colony of 30 to 40 breeding pairs.

Feldmann is pleased with the progress of construction on the new facility: "Frankfurt Zoo is not only one of the most popular leisure facilities in the Rhine-Main region. As a scientifically managed zoo, it is above all committed to species conservation and environmental education. With the development steps taken in recent years - such as the construction of the new ape house and the quarantine station - the zoo can fulfil its mission in a contemporary way. Soon, visitors will be able to immerse themselves in the world of the penguins and learn a great deal about the animals and their living conditions in a stimulating and relaxed atmosphere - right in the middle of the city - that's what's so special about the zoo."

"The modernization of the zoo must continue in significant steps so that it can continue to fulfill its diverse tasks in the future. The construction of the new facility for the Humboldt penguins is another significant step in this direction. The new facility also includes a didactic concept, because the zoo builds bridges across generations and nations with its wide range of activities. We want to expand and further develop this important educational approach for the next generations in the coming years," says Head of Culture Ina Hartwig.

Zoo director Professor Dr. Manfred Niekisch knows what has already been done since construction work began at the end of 2016: "First, the Great Pond was lowered in order to erect the so-called shoring, a stable temporary wall. The task of the shoring is to support the construction pit wall against the pond. In addition, supply and disposal lines had to be laid - among other things, to supply the Exotarium with energy and to drain the seal enclosure during the construction period. The excavated earth is clearly visible, especially in the area of the future technical building and the water basin for the penguins. The soil in the area of the construction site is very loamy. Therefore, before the construction crane could be mounted, a crane foundation had to be built first."

Currently, so-called micropiles are being anchored in the ground in the area of the future penguin water basin. They are intended to hold the concrete pool to the ground when buoyancy needs to be intercepted. This may be the case when the basin is emptied for cleaning or revision. When the weight of the water is absent, the clayey soil beneath the concrete can expand, causing cracks in the concrete. However, during excavation work in the area of the future engineering building, a bedrock layer was found that could make it difficult to install the micropiles. An additional test statics is now to clarify the effects.

Delays occurred during the construction of the shoring, as it turned out that the cordoning off with so-called big packs was not sufficient and a partition wall has to be put in place. "However, these initial delays have largely been made up. Currently, everything is well on schedule, so that we can continue to assume that the facility will open in summer 2018," Hartwig said.

The next important step will be the reconstruction and relocation of the pipes for the drainage in the exotarium, seal facilities and penguin facility complex. In addition, excavation work continues, so that soon you will be able to see the outline of the water basin.