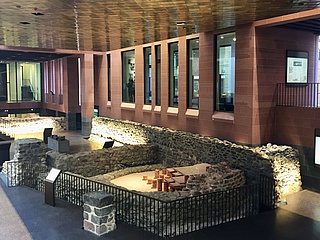 An archaeological crowd-puller in the heart of Frankfurt

(ffm) In the centre of Frankfurt's new old town, an archaeological showcase into the beginnings of the city of Frankfurt am Main has been attracting visitors since August 2018: The newly presented Imperial Palace franconofurd (formerly "Archaeological Garden"), a branch of the Archaeological Museum Frankfurt (AMF), has attracted numerous guests to the excavations in the city center since its opening.

Frankfurt's head of culture, Ina Hartwig, emphasizes: "Since its opening a year ago, the imperial palace franconofurd has been drawing regional and international visitors an extremely vivid picture of various time phases of the earliest Frankfurt. The high visitor numbers, 750,000 within a year, show the fascination that history and archaeology exude." To this she adds, "The free admission also motivates, of course!". The executive director of the Archaeological Museum Frankfurt, Wolfgang David, whose house is in charge of the site, emphasizes the significance of the archaeological traces "Within Frankfurt's new old town, a mixture of reconstruction and new buildings, these cellars are the only preserved structural remains of buildings in the city center that were destroyed in air raids in March 1944."

The archaeological monument with building remains from Roman times, the Middle Ages and early modern times is located immediately west of St. Bartholomew's Cathedral. The walls were uncovered in lengthy excavations, partially reconstructed and rebuilt. In 1976, the wall sections were conserved and made accessible to the public in the "Archaeological Garden". Since 2017, these oldest stone buildings of Frankfurt's old town have been covered and protected by the "Stadthaus am Markt". The new museum presentation of the complex incorporated the results of the most recent excavations by the Office for the Protection of Monuments from 2012 to 2014 as well as current scientific evaluations. After the structural remains of the early medieval palace, the site now bears the name Kaiserpfalz franconofurd.

The presentation with backlit displays and "life pictures", the vivid bronze model donated by members of the Historical-Archaeological Society of Frankfurt, the high-quality architectural design and free access attract visitors from all over the world. They can now learn about the origins of the city and the history of the cathedral hill up to modern times in the heart of Frankfurt's old town. The Kaiserpfalz franconofurd thus offers a welcome addition to the cultural offerings of the northern Museum Embankment. Just a few minutes' walk from the palace, interested visitors can take a more in-depth look at the history of the Rhine-Main region from the Stone Age to the time of the imperial palace in the 9th century at the Archaeological Museum Frankfurt (AMF).

Opening hours are from 10am to 6pm. There are public tours at 3 and 4:30 p.m. on Saturdays; 4:30 p.m. on Wednesdays. Admission is free. The facility is barrier-free, but not the Bendergasse exhibition space. There are no guided tours at the Museumsuferfest on August 24. Group tours are available by appointment.