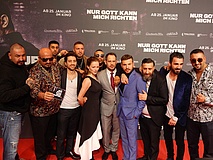 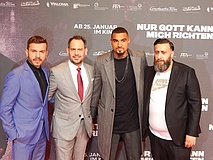 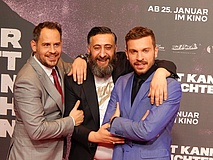 The Main metropolis is more and more often the backdrop for German cinema films. Of course, it is especially the skyline, which always provides impressive images. But that other sides of the city can also provide atmospheric moments is now impressively proven by the thriller "Only God Can Judge Me", which filmmaker Özgür Yildirim shot in large parts in Frankfurt.

On Monday, the director and his cast came to the CineStar Metropolis to celebrate the premiere of the gangster thriller. In addition to lead actor Moritz Bleibtreu, his co-stars Kida Khodr Ramadan, Edin Hasanovic and Franziska Wulf, as well as the two rappers Xatar and SSIO did the honours. Yildirim not only had Xatar write the title song, he also gave him and fellow rapper SSIO a small role in the film. Christian Becker, who produced the film together with Moritz Bleibtreu, was enthusiastic about the two rappers: "With Xatar and SSIO, we found two composers who made us a kind of concept album for the film."

The music, like the locations, contributes greatly to the authentic feel of the film. True, that wasn't necessarily Yildirim's intention, since he was shooting a feature film, not a documentary. But, according to the director, "because we shot in Frankfurt, and in the most blatant corners, it's inevitable that you see things that are real." And so you don't see the beautiful glossy Frankfurt that you know from other films, but also the gritty and dirty sides of the city, which are not just limited to the station district.

The stars and makers of the film were greeted enthusiastically by the premiere audience, which included Eintracht player Kevin-Prince Boateng. No wonder everyone involved was in good spirits. But they can also be proud of their film. Özgür Yildirim has directed a thrilling gangster thriller whose protagonists are very complex, blurring the lines between good and evil time and again. The jury of the Hessian Film and Cinema Award was also so taken with "Only God Can Judge Me" that they awarded it "Best Feature Film" 2017 in October.

You can find our detailed film review shortly in our cinema tips. But this much is already said: The exciting and abysmal gangster film is definitely worth a visit to the cinema - and not only because it was filmed in our great city!