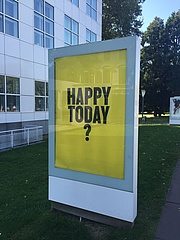 Happiness is a universal topic that concerns everyone. When it is also presented with the professionalism of a graphic design superstar, with humour and self-irony, it becomes an inspiring exhibition experience. "The Happy Show is a stroke of luck for Frankfurt!" cheered Hessischer Rundfunk at the opening of the major exhibition at the Museum Angewandte Kunst. Now the runtime is drawing to a close: Only until September 25, 2016, the exhibition Stefan Sagmeister. The Happy Show at the Museum Angewandte Kunst in Frankfurt.

Since its opening in April, the show about happiness, bathed in striking black and yellow, has so far attracted more than 70,000 visitors to the building on Schaumainkai, making it one of the museum's most successful exhibitions. After North America, Paris and Vienna, Frankfurt is the first and only German stop of The Happy Show. Next year it will continue its world tour in Zurich.

What makes us happy? Can you train to be happy? Graphic designer Stefan Sagmeister, who closes his New York studio for a sabbatical every seven years, has embarked on a personal quest for happiness for the exhibition. In the process, he has subjected himself to various self-experiments in order to find out the most effective method for increasing an individual's sense of happiness: He has tried meditation, concentration and relaxation techniques, undergone behavioral therapy, and consumed mood-boosting pharmaceuticals.

In the exhibition, he supplements the results of his experiments with scientific data, incorporating both into highly emotive infographics, intriguing headlines, prints, amusingly educational videos, and installations, thus immersing visitors to The Happy Show in his world of thought. Against a backdrop of bold black and yellow, his works flood the museum and invite visitors to join in at interactive stations: for example, you can make sugar cubes glow red by laughing broadly, pedal hard on a stationary bicycle to illuminate giant illuminated letters, or draw happy animals that Sagmeister then animates into a cartoon.

At the end of the exhibition, visitors are invited to rate their personal state of happiness by pulling a piece of gum from one of ten giant glass tubes, numbered from one - unhappy - to ten - very happy. According to this "happiness barometer", the Frankfurt public is a pretty happy one: on several occasions, the tube with the number eight was the first to be empty. (Text: Museum Angewandte Kunst)