Open-Air Cinema at the SCHIRN
from FFM Aktuell 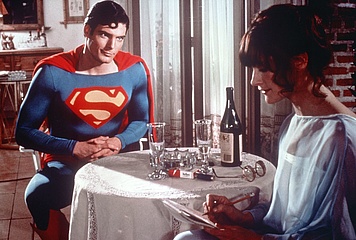 For the exhibition "PETER SAUL"

After visiting the exhibition, go to the movies: On three evenings in August, Wednesday the 16th, Thursday the 17th, and Friday the 18th of August 2017, each at 9:30 PM, the Schirn Kunsthalle Frankfurt invites you to an open-air cinema. Visitors can expect cinema highlights that correspond with themes from the work of the US American painter Peter Saul: The films Superman (1978), Free Angela and All Political Prisoners (2012) and Apocalypse Now (1979) will be shown. Public tours of the Peter Saul exhibition will be held at 8 p.m. on Wednesday, August 16 and Thursday, August 17. Admission to the open-air cinema on these two days is with a valid exhibition ticket. Admission to the film screening on Friday, August 18 is free. The Badias Catering team will be providing barbecue and drinks on all dates.

Just before his home planet of Krypton explodes, Kal-El is sent to Earth by his father. As an adult Clark Kent (Christopher Reeve), he finds that he has superpowers. With these, he becomes Superman and fights evil.

Peter Saul deconstructs the impeccable hero in his pictures. He frames Superman with banalities and shows his dark moments of defeat, such as in Superman and Superdog in Jail (1963), in which he sits in jail with his costume torn, a toilet bowl beneath him from which Superdog drools with relish.

This documentary depicts the life of young college professor Angela Davis. Through her political activism, she becomes embroiled in a kidnapping attempt that ends in a shootout, four deaths, and her name on the FBI's most-wanted list.

Peter Saul has portrayed the civil rights activist several times. The Schirn is showing the painting San Quentin #1 (Angela Davis in San Quentin) (1971), which shows her at the gates of the prison, tormented by three little pigs named "Justis," "Munny" and "Powur."

During the Vietnam War, military policeman Captain Willard (Martin Sheen) is sent on a dangerous mission to Cambodia. He is tasked with taking out renegade U.S. military Colonel Kurtz (Marlon Brando), who is waging his own war in the middle of the jungle as the leader of a rebel tribe.

Peter Saul was the first US painter to put the Vietnam War on canvas. His Vietnam paintings address one of the darkest chapters in American history. In the major work of this group of works, Saigon (1967), Peter Saul takes sides and expresses his anger at the atrocities committed by the US military in Vietnam, such as torture and sexualized violence.

You can also find more info at: www.schirn.de