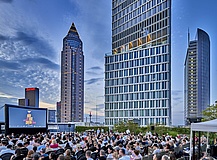 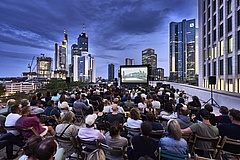 Cinema hasn't been this breathtaking and beautiful for a long time: in addition to the open-air cinema in the courtyard of the old police headquarters, the Lichter Filmfest team gave all Frankfurt film fans a truly spectacular open-air cinema experience this summer: the High Rise Cinema. Over four weekends, around 3,000 visitors were able to experience films on selected roof terraces in the city. For the audience an experience, for the makers a complete success: all events were sold out; the media echo and the response in the social media enormous.

To the finale there was then not only a great view of the skyline at atmospheric sunset. There rose then also still another super moon to dip the skyline in bright orange. At the latest here it became clear: This open air cinema was really a unique experience in front of a German-wide unique scenery. But as beautiful as this traveling cinema was, for the makers around Gregor Maria Schubert, festival director of the Lichter Filmfest Frankfurt, it was also a logistical masterstroke.

Every Thursday to Saturday, modern classics were shown in the period from 21. July to August 13, modern classics and current cinema highlights were shown in front of a breathtaking backdrop - on the roof terraces of the Opera Tower, the Taunus Tower, the Municipal Green Space Office and on the roof garden of the Skyline Plaza. "We could have easily sold five times as many tickets for all evenings," said project manager Stefan Adrian. Due to the rather limited space, however, around 3,000 people were able to enjoy a ticket for this cinema experience.

The High Rise Cinema was made possible thanks to the active support of the City of Frankfurt and the film funding "HessenFilm und Medien". Among other things, the city's Main Office and City Marketing provided financial support of around 85,000 euros for the project. Film moments in a unique skyline atmosphere: It was important to those responsible in the Main Office and City Marketing to support a summery, high-quality series of events in Frankfurt. In addition, the OpernTurm, the TaunusTurm, the Skyline Plaza and the municipal green space office participated as cooperation partners.

Also the Frankfurt open-air cinema, which so far this season has attracted 8500 film lovers to the mystically illuminated courtyard of the old police headquarters, is nearing its end. For the grand summer cinema finale, the films "Come on, come on", "The Batman", "Elvis" and "The Rocky Horror Picture Show" will be shown from Thursday, August 18, to Sunday, August 21. We are already looking forward to the next outdoor cinema season!