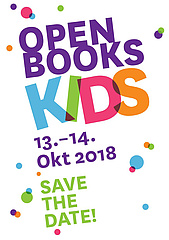 The Book Fair not only brings many great programme highlights for adults to Frankfurt. Children can also look forward to exciting and enthralling offerings on and off the fairgrounds. One of these will take place as part of the OPEN BOOKS series of events: On Saturday, 13 October, from 11 a.m. to 7 p.m., and on Sunday, 14 October, from 11 a.m. to 6 p.m., a total of 16 children's books will be read aloud and presented in interactive performances at the Junges Museum. All young readers between the ages of four and 13 will be treated to an exciting and entertaining look at the latest works by children's authors.

In cooperation with German-language publishers and with the Kulturamt Frankfurt am Main, the Junge Museum offers readings of selected new autumn publications for children as part of "Open Books Kids". A special feature is that the authors present their works in person and often together with the illustrators.

For example, comic book artists Annelie Wagner and Christopher Tauber, aka Piwi, will present the graphic novel "Frankfurt 1918 - Out of the Darkness" on Saturday, October 13, at 12 noon: Shortly after the end of World War I, four girls in Frankfurt get caught in the middle of the militant beginnings of the women's movement. They demonstrate, found their own club, resist the paternalism of the boys' gangs in their neighbourhoods and come into contact with important women's rights activists.

The children's book is published to coincide with the exhibition "Against! For it? Revolution. Power. History." which will be on view at the Young Museum beginning October 23.

This year, "Open Books" is taking place for the tenth time. At the reading festival for the Frankfurt Book Fair, works from around 70 publishers will be presented in more than 100 readings.