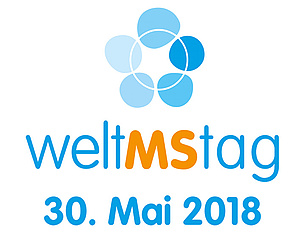 Since the "Multiple Sclerosis International Federation" with participation of the DMSG launched the World MS Day in 2009, more and more people participate in the numerous actions and campaigns every year. In Hesse, too, the global day of action is a fixed date in the calendar of the state association of the MS self-help organization to draw attention to this still incurable disease and life with MS.

The Counseling Center Frankfurt invites MS sufferers, relatives and other interested parties for Wednesday, 30. May, from 14 to 17 o'clock, to an "open day" in their rooms in the district Ostend at the Wittelsbacherallee 86. The team is available to visitors during the time for questions about the DMSG Hesse, its wide range of counseling and therapy and the disease multiple sclerosis.

In addition, at 3 pm, the MS feature film "Emiloph&eacute;lie" will be shown. Quasi at the original location: Because for the filming among other things the Frankfurt advice centre of the DMSG Hessen served as a backdrop. In cooperation with the DMSG Hessen, the MS film "Emiloph&eacute;lie", shot and produced by a group of Frankfurt students, had its premiere on World MS Day 2015 at the German Film Museum in Frankfurt. The feature film "Emiloph&eacute;lie" focuses on the story about a young couple: Emil and Oph&eacute;lie. He is a serious, quiet person. She is the contrast: bubbly, lively. Emil has just received his MS diagnosis and doesn't know how to deal with it, what to expect, if and whom to confide in. For many months the crew worked on their ambitious project, shooting in and around Frankfurt and spending a lot of time in the editing room. All this in addition to their work and studies. But all the effort was worth it: at the premiere in 2015, the audience at the Filmmuseum was completely thrilled.