Open House: The Jewish Museum invites you to the construction site!
from FFM Aktuell 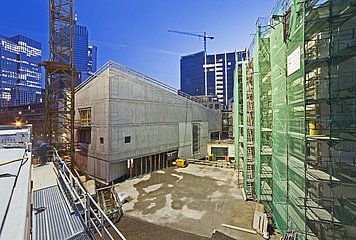 (ffm) After more than three years of closure and temporary platforms such as the Pop-Up Boat (2016) and the Pop-Up Monument (2017), the new Jewish Museum is increasingly taking shape. Now, on the occasion of its 30th anniversary, it invites the public From November 10 to 15 to the museum construction site.

For five days and six nights, the museum will present itself as a place in the making. In both temporal and spatial terms, the situation of an in-between can be experienced, which is also the theme of the contemporary art exhibition, the Lab and the evening events of Open House.

In the semi-renovated rooms of the historic Rothschild Palais, an art installation by Nir Alon, sculptures by Ilana Salama Ortar and video works by Dana Levy will be presented. The contemporary works reflect on the present as a fragile place marked by memory and change.

In the future museum foyer of the new building, there is a temporary architectural intervention that uses participatory displays to refer to the future of the new Jewish Museum and invites visitors to help shape it.

In addition to the future library and information about the architecture of the new museum, a lab for the first temporary exhibition in the new space forms a special focus of the temporary installations. The exhibition is dedicated to the theme "We are here! Jews in Europe 1945 - 1950" and presents itself on site in the form of selected photographs and a participatory map of Europe.

During the day, curator and artist talks as well as site tours will take place at the museum construction site. In the evenings, the temporary installations will be transformed into a stage for concerts, film screenings, discussions and performances. The event kicks off with a concert featuring Masha Ray's electro-swing band, followed by an evening of talks with FAZ editor Werner D'Inka about Volker Reiche's two-year comic project "Manu and Saul" on the building fence of the Jewish Museum, which will be published on the occasion of Open House. Max Czollek's polemic "Disintegrate yourselves!" is the focus of another evening of talks, which ends with a DJ set by the author.

The theme of the first temporary exhibition will be taken up by the just-completed documentary film "Packed Suitcases", which will be shown for the first time in its long version and explored in depth in a conversation with, among others, the film's protagonist and singer of the Jewish Monkeys, Jossi Reich. Following the discussion, a musical surprise has been announced. Open House will close with the performance of the Futur II subjunctive "not from anywhere", which is also dedicated to the in-between of Jewish life in Germany after the Shoah, and will be performed for the first time in Frankfurt in cooperation with Künstlerhaus Mousonturm.

Open House celebrates and thematizes the museum's 30th anniversary with its own symposium on Jewish museology in Europe, the genesis of which was significantly shaped by the first Jewish Museum in the Federal Republic of Germany. Nine international guests will discuss the founding history of the Jewish Museum Frankfurt and the emergence of other Jewish museums, as well as the challenges of the present and future. A large-scale presentation invites visitors to trace the history of the Jewish Museum through selected video statements and contributions.

During Open House, the Jewish Museum Frankfurt presents itself as an open house, in more senses than one, inviting the public to take a look at and help shape the future. "Having appeared twice now as a Pop Up Museum, we are pleased to be able to say Pop In this year and invite the public to the museum building site of the future," said Museum Director Mirjam Wenzel during the press tour on Thursday, November 8.

Cultural Affairs Director Ina Hartwig praised the museum's initiative and program, saying, "I invite all interested parties to the Jewish Museum's shell, which already promises a fascinating spatial experience and heightens anticipation for the opening in 2019. In this extension, the Jewish Museum's successful work will find more space in the coming year and continue the museum's self-image as a museum without walls. In times of growing anti-Semitism and increasing verbal and physical violence, it is important to set an example, and to highlight Jewish culture with all its facets."