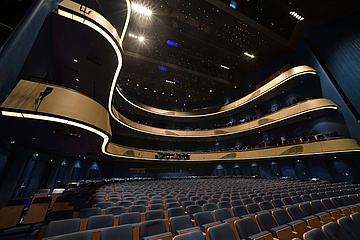 This is really grand opera and a reason to rejoice in the cultural landscape of the city of Frankfurt: after 1996, 2003 and 2015, Oper Frankfurt was voted "Opera House of the Year" for the fourth time for the 2017/18 season as well as for the third time under the directorship of Bernd Loebe in the annual survey of the trade magazine "Opernwelt". Ten of the publication's 50 international and independent authors cast their votes this time for the house on Willy-Brandt-Platz.

As to the reasons, "Opernwelt" comments as follows: "Honored is a house that, under artistic director Bernd Loebe and his team, has been attracting attention for many years with a cleverly balanced program, strong directorial signatures, excellent repertoire care and high ensemble culture."

In August 2018, Oper Frankfurt also took the top spot in the category "Convincing overall performance of a house" for the ninth time in the authors' survey of the German Stage published by the Bühnenverein. This is only the second time in the history of the two author surveys that one and the same opera house has been voted into first place: in both 2015 and 2018, this was and is Oper Frankfurt. Respect!

Intendant Loebe accepts this renewed award with great pleasure, also on behalf of his staff: "Obviously we have a lucky hand here in Frankfurt when it comes to selecting conductors and singers. Renowned directors and designers like to come here, they feel understood. The Frankfurt Opera and Museum Orchestra under its general music director Sebastian Weigle and the Frankfurt Opera Chorus under its director Tilman Michael enjoy their work, just as all the other departments of the house pull together. All this guarantees a consistent artistic level. 2017/18 was indeed a highly successful season for us, with one production being enthusiastically received by the press and the public after another. I hope that we can continue on this path and that the important decisions concerning the future of Städtische Bühnen Frankfurt will also be taken by those responsible in the spirit of artistic continuity."

Frankfurt's head of cultureIna Hartwig is also pleased with Oper Frankfurt's good performance: "I congratulate Intendant Bernd Loebe and his entire team on this renewed award! It adds to a series of honours that the house has already received. All these awards confirm the high standard of Oper Frankfurt. It is thanks to Bernd Loebe and his staff that our city's opera house enjoys such a high international standing thanks to its extraordinary productions. It is important to secure this level for the future: both in terms of content and in terms of the structural design of this house. I will do my utmost to achieve this!"