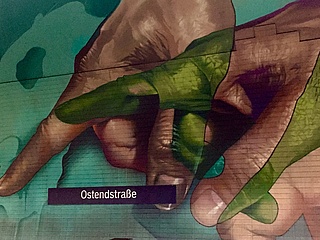 (ffm) A memorial plaque and several additional signs entitled "Alptug Sözen Station" are to be installed at Frankfurt's Ostendstraße S-Bahn station. This was agreed by the family of the young man, the city of Frankfurt and Deutsche Bahn.

Mayor Peter Feldmann says: "The fate of Alptug has deeply moved many people far beyond the borders of Frankfurt. In an online petition, thousands nationwide have spoken out in favor of renaming the station in his honor. We do justice to the concern of a worthy and lasting commemoration of his selfless and honorable trade with the solution now found."

The 17-year-old student Alptug Sözen died at Ostendstraße station last November while trying to help a man lying in the track bed. Klaus Vornhusen, Group Representative for the State of Hesse of Deutsche Bahn, says: "The tragic death of Alptug Sözen has also shaken the employees of Deutsche Bahn. It was therefore important for us to find a dignified form of commemoration for this event, which was also very touching for us, in coordination with the family and the city of Frankfurt."