Over 250,000 visitors at the Old Town Festival
from FFM Aktuell 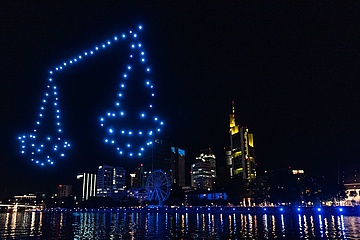 "It's really turned out wonderfully," a former resident of Frankfurt's old town tells us, whom we meet on our tour at the big Old Town Festival. His house has not been rebuilt, but he recognizes a lot and the mixture of old and new is absolutely successful. The state chairman of the SPD Hesse, Thorsten Schäfer-Gümbel, was also impressed. He was shown around the old town by the Frankfurt apple wine innkeeper Lia Wöhr alias Bäppi La Belle and was repeatedly involved in lively conversations with Frankfurt citizens. The tone was always positive, which Schäfer-Gümbel's party colleague, Lord Mayor Peter Feldmann, could also sum up after three exciting days: "Not only the festival itself, but also seeing so many people strolling through Frankfurt's new heart, extensively looking at the facades, exchanging opinions, enjoying music, theatre and the drone choreography over the Main was a great pleasure for me," said Feldmann, who after all was himself one of the people who were initially rather critical of the project, but now stands behind the new old town with full enthusiasm. And so he added: "I hope that the enthusiasm for this architectural masterpiece will not wane. Come again - to make our new Old Town as vibrant as it once was."

This appeal is, of course, not only for the 250,000 - 300,000 people who cavorted in the alleys below the cathedral, on the Römerberg and on both sides of the Main from September 28 to 30, and who always remained cheerful and peaceful even when things got a little more crowded and cramped. All Frankfurt residents, as well as all visitors to our city, are invited to visit the beautiful area on a regular basis - which is guaranteed to be the case, especially in the coming months, when the individual shops, eateries and museums will gradually open their doors as well.

In summary, it can be said that the Old Town Festival was a great success. The Tourismus- und Congress Gesellschaft Frankfurt (TCF), the Frankfurt Opera House, the museums, the Protestant and Catholic churches and many more offered visitors a programme the likes of which Frankfurt has never seen before: pop, big band and opera arias on two stages, Goethe and Stoltze, imperial coronations, a warship from ancient Rome and a Frankfurt welcome formula - developed by Kelechi Onyele especially for the Altstadtfest.

Highlight of the festival weekend, however, was the premiere of "Sternenbilder - eine Symphonie für die Frankfurter Altstadt". Together with the service providers bright! and Sky Magic, the Frankfurt studio Markgraph developed a drone choreography for this, in which light play, specially composed music and text passages merged into a homage to Frankfurt. Already at the dress rehearsal on Friday evening thousands lined the banks of the Main. Then on Saturday evening: thunderous applause for the drone ballet over the river. For many it was clear: this impressive show is a perfect alternative to fireworks. Hopefully this was not a one-time guest performance in Frankfurt's night sky!