Over 4,000 Christmas market boxes were sold
from FFM Aktuell 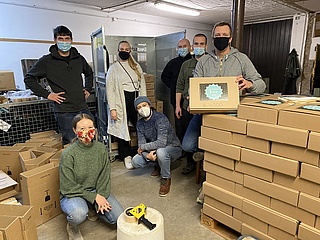 The organizers are pleased about one of the largest Bethmännchen campaigns in Frankfurt's history and a successful fundraising initiative.

The pandemic does not stop at the Advent season and so this year, with a heavy heart, Christmas markets had to be canceled throughout Germany, including the one at Frankfurt's Römer. In order to bring a piece of Christmas market feeling directly to people's homes as well as to support affected merchants, the city portal Frankfurt-Tipp.de has teamed up with renowned manufactures from the region as well as Christmas market stand operators and jointly created a lovingly designed gift box.

This is filled with local delicacies and is intended to ensure the right Advent mood for big and small sweet tooth even in this difficult winter.

Since the start of sales on November 11, the demand was and is enormous. Thus, by mid-December, over 4,000 boxes had been sold. The well-known confectioner Hollhorst produced an incredible 24,000 Bethmännchen for this purpose - one of the largest sales campaigns of the traditional pastry in Frankfurt's history. In addition, 4,000 litres of Winzerglühwein from Weingut Schreiber, 600,000 g of roasted almonds from M. Eiserloh, 16,000 Christmas chocolates from Köhler Küsse, 4,000 gingerbread hearts from Confiserie Graff, 4,000 Mispel & Calvados from Miss Pell and 8,000 Christmas postcards were carefully packaged and then delivered by the hard-working Frankfurt-Tipp Christmas elves.

Particularly as an employee gift for (virtual) Christmas parties, the Christmas Market Box enjoyed great popularity - and not only in the Rhine-Main region: "We received orders from all over Germany and other European countries. In order to be able to meet the immense demand, the team has set up the largest package campaign in the history of Trifels Verlag", says Björn Fritsch, marketing manager of Trifels Verlag, which is responsible for Frankfurt-Tipp. The large interest had even led to the fact that the sales had to be stopped at short notice over the Frankfurt tip Shop. However, the quotas were quickly increased and the ordering options extended to other European countries, so that boxes could still be ordered.

Donation campaign for the Kinderengel Rhein-Main

The great success of the Christmas market box makes those responsible very happy for another reason as well: "With every box sold, the amount we will donate to the Kinderengel Rhein-Main increases", Michael Meckel, Managing Director of Trifels Verlag, is pleased. Because per box 1 euro goes as donation to the social mechanism, which supports seriously or life-shortened ill children and young people as well as their families, in order to arrange their daily life somewhat easier. For more info on Kinderengeln Rhein-Main, visit www.kinderengel-rheinmain.de.

The Christmas market box is now completely sold out. Up to last a multiplicity of inquiries received with the team of Frankfurt tip. With further contingents, several thousand boxes could have been sold in this context.

For the Advent season 2021, a new edition of the Christmas Market Box is already planned.

Further information on the box and the products it contains is available at www.weihnachtsmarkt-box.de.