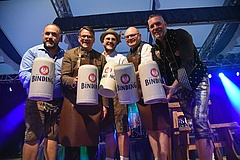 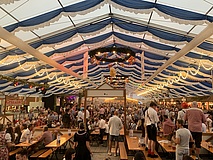 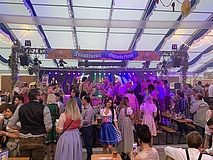 "It was three difficult years, but we are still here! The Frankfurt Oktoberfest is still here!" At the latest with these words from festival host Dennis Hausmann, the comeback of the Frankfurt Oktoberfest was perfectly heralded. Shortly after opening at 5:30 p.m., the sold-out marquee at the Waldstadion, where Eintracht was playing the first game of the Champions League group stage, was already filled. But while the mood among the fans there sank more and more in the course of the evening due to the 0:3 defeat against Sporting Lisbon, the exact opposite was the case in the festival tent. At the latest when the Frankfurt Oktoberfest band took to the stage at 7 p.m. and fired up the guests with some cult hits such as "Above the Clouds" or "The Hands to Heaven," the mood barometer climbed abruptly. There was loud singing along and exuberant dancing in the aisles and on the benches. It was nice to experience again such a great mood.

Against 19:30 Dennis and his brother Patrick Hausmann as well as co-organizer Kai Mann and Binding boss Otto Völker welcomed Hesse's Prime Minister Boris Rhein for the traditional tapping of the barrel on stage. Rhein, a true Frankfurt lad, came directly from a meeting with Bavaria's Prime Minister Markus Söder, whom he then invited to the "true Oktoberfest" in the Main metropolis. After all, we would have the better atmosphere and the better beer here, said Rhein. Whether Söder will accept the invitation of Boris Rhine and be present in the next year actually as a guest of honor with? One may be curious.

After the prime minister had successfully completed his barrel tapping premiere and enjoyed a hearty gulp of Binding Festbier, the Frankfurt Oktoberfest 2022 was officially opened: "I wish all guests an exuberant time and the organizers and the many artists every success," Rhein called out to the cheering crowd. Afterwards, the next highlight immediately followed, when musician, producer, restaurateur and radio presenter Hassan Annouri took to the stage to perform his new Frankfurt anthem "Wir sind alles Frankfurter". Although the song is now not necessarily a party cracker, Annouri managed perfectly to carry away the people on and in front of the stage and to provide for genuine goose skin mood in the entire marquee. After Annouri, star guest Mickie Krause then took over the microphone and finally turned the opening event into a big party night, which was the perfect kick-off for the restart of the popular event. While the guests, to which also some well-known faces belonged such as the boys of Mundstuhl, celebrated exuberantly, the relief about the successful opening evening was clearly noticeable to the organizers.

The Frankfurt Octoberfest guest still until 03 October in the marquee at the stadium (P9). Who would like to celebrate still with, should hurry with the map purchase, because many evenings are already sold out. In the coming four weeks, Oli P., Jimmie Wilson, the Weather Girls, Roy Hammer, Bernhard Brink and NDW star Markus will be among those on stage. The Oktoberfest band will also be back, of course, as will the popular Frühschoppen and Tracht-Nächte. All further info finds you under: https://www.frankfurter-oktoberfest.de/