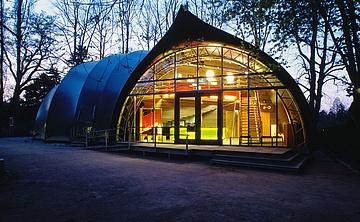 On the occasion of its anniversary, the Papageno Musiktheater is pleased to announce a beautiful success: more than 50,000 visitors have attended the performances of the Papageno Musiktheater in the past months. In a shortened season, due to the early summer holidays, 268 performances were shown. This means that Papageno can once again report an occupancy rate of over 95 percent.

However, the music theatre does not want to rest on this success. In the 21st season, visitors will be offered a balanced mixture of well-known audience favourites and new productions. It starts on August 2 with the last performances of "Urmel aus dem Eis" and the "kleiner Muck", in the evening program with a last concert of "Kennen Sie Jacques Offenbach?" and two performances of the "lustigen Weiber von Windsor".

Officially, the 21st season will then open on August 25 with an exciting evening program, "Thrillers in the Opera World," consisting of a concert section and the opera play "The Bajazzo." 26 different productions, including musical fairy tales and adventure stories for children and young people as well as musicals, concerts, operettas and opera plays in the evening programme are on the varied programme. Highlights are likely to include the revival of the successful musical production of "My Fair Lady" and the opera play "Rigoletto", which features two wonderful young singers (soprano and tenor).

The new season will again feature high-profile special events: In the fall, the concert series "World Stars as Guests at Papageno Musiktheater" is on the program. Two concerts with Anna Maria Kaufmann and three Christmas concerts with Gail Gilmore, who celebrates her role debut in the cross-section from the fairy tale opera "Hansel and Gretel" as the Crunchy Witch, but also ends her international opera career at the same time. And young up-and-coming singers will be presented in the two concerts "Italian Opera Night". The 200th birthday of Jacques Offenbach will of course also be duly celebrated. For this purpose, the world-famous operetta "Orpheus in the Underworld" will be included in the program with the fiery hell cancan.

In the children's program, two premieres will be on the program: The musical fairy tale "Rumpelstiltskin" and Astrid Lindgren's "Michel in the Soup Bowl." And there will be a reunion with "Jim Knopf", "Sleeping Beauty", "Cinderella", "Emil and the Detectives", "Oliver Twist" and of course with Papageno in the "Little Magic Flute". There is also a small anniversary to celebrate in the children's programme: the now ten-year cooperation with the Alte Oper Frankfurt will be celebrated this season with the musical fairy tale "Frau Holle".

The 21st season will then also bring a real milestone in the history of the Papageno Music Theatre: The one-millionth audience member will be welcomed at one of the performances. Congratulations!

Mayor Peter Feldmann emphasizes in his greeting to the new season: "Particularly fascinating for the visitors is the unique atmosphere that arises from the proximity to the performers, singers and musicians of the Papageno ensemble. So you can follow the action intensively and become completely absorbed in the play and the music." FDP Secretary General Nicola Beer added: "It succeeds here to connect the high quality artistic performance, which is realized by the many committed actors, with an important social task: Thus, cultural education also means education for cultural participation. Access to art and culture enables new access to topics and also to each other - and here we all have a task to fulfil."