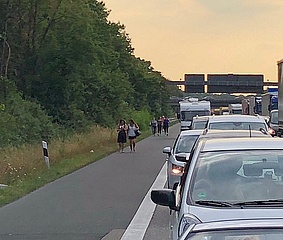 Last Friday, Helene Fischer attracted thousands of fans to the Commerzbank Arena. Many of them travelled by car or coach, which led to considerable traffic obstructions around the stadium. Especially the area of the A3 as well as the B43 were affected. As is customary for such a major event, the Frankfurt police, together with their cooperation partner Hessen Mobil, had drawn up a concept concerning safety and road traffic. Part of the concept, which had proved very successful at similar events in the past, is to divert traffic to the visitors' car parks ahead of time by means of temporary exits opened especially for the event, thus preventing traffic obstructions.

On Friday, the makeshift exits were initially not activated, causing miles of congestion. When the situation had not yet eased shortly before the start of the concert, about 100 people parked their vehicles illegally on a makeshift exit in the area of the north roundabout at the "Frankfurt Süd" junction. As a result, the motorists, their companions and third parties put their lives in danger. The vehicles did not block any lanes. However, some very dangerous situations arose on the B43, as a large number of Helene fans made their way to the stadium via the federal highway.

Police therefore had to take various measures, such as blocking off lanes, to ensure the safety of concert-goers walking on the roadway. Today, Frankfurt police once again explicitly emphasized in a press release that parking on the makeshift exits is not permitted and can lead to life-threatening situations. Even time constraints do not justify such behavior.

In this particular case, the illegal parking of the vehicles will have no consequences for the drivers, as the police were too involved in extensive traffic and security measures to be able to ensure the safety of the concert-goers and the event. The punishment of administrative offences was initially of secondary importance here and the safety of the concert-goers was to be given priority.

The Frankfurt police immediately took measures, together with their cooperation partners, to ensure a safe and speedy return journey. This was achieved by occupying and opening the makeshift exits in a timely manner